Besides marine wildlife, what else is entangled by ghost gear? 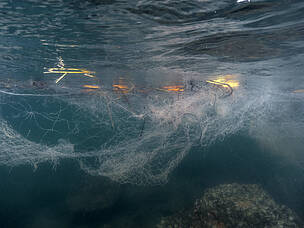 Ghost gear
© David Poon
“Ghost gear” is one of the ten most commonly found marine litter in Hong Kong. It refers to abandoned fishing nets, pots, lines and hooks. As the deadliest form of marine litter, ghost gear captures marine life and kills countless marine species. Animals entangled by ghost gear will become baits attracting other victims. Not only does ghost gear harm the marine ecosystems and cause economic losses to the fisheries, it also poses threats to the safety of recreational water users and vessels. WWF-Hong Kong has long been closely monitoring the situation of ghost gear in Hong Kong. We launched “Ghost Gear Detective” citizen science project in 2019 and recruited 58 divers to report the sightings of ghost gear in Hong Kong Waters. Currently, our data covers 43 diving spots in Hong Kong, including some sites that have high ecological value such as marine protected area Our citizen scientists have filed 191 reports with 199 pieces of ghost gear found. Among all different types of ghost gear, 75% are abandoned fishing nets and the rest are pots, lines and hooks. According to our citizen scientists, the size of some ghost nets is comparable to the size of a car or a bus.

Based on the survey photos, we infer that 102 discarded fishing nets are gillnets, accounting for more than 80% of the total nets. We have also recognized various marine species entangled by ghost gear, including numerous coral species, consumable fish and crabs such as chocolate hind, red seabream, filefish, and blue-swimming crab. Besides, our investigation reveals that most ghost gear has small meshes. 39% of the recorded meshes are smaller than 2 cm whereas 79% are no larger than 4 cm. Because of the small meshes, most of the fishing nets can catch fish larvae, leaving negative impact on the fisheries and marine ecosystem. To alleviate and solve the ghost gear problem, collaboration between different stakeholders is necessary. Fisherman is one of the most crucial stakeholders. Since fishing gear is an essential tool for them to make a living, it’s unusual to abandon fishing nets unless the nets were damaged or lost due to bad weather conditions. Some fishermen indicated that illegal fishing could be one of the major causes of ghost gear. Illegal fishers tend to dump their gear to avoid being caught. Meanwhile, the stealing issue has become more and more common in recent years, thieves steal fish catches and dispose the fishing gear in the ocean.

The government also plays an indispensable and leading role to solve the ghost gear problem. WWF has been working closely with the Agriculture, Fisheries, and Conservation Department (AFCD) and established "Coral Saver - Ghost Gear Monitoring Platform". This platform facilitates the reporting of ghost gear sightings and makes it easier for the follow-up actions by AFCD. Between 2019 and 2020, AFCD has cleaned up 268 kilograms ghost gear. However, to address the issue in the long term, the government needs to work with various stakeholders to jointly improve the fishery management, combat illegal fishing, establish a complete fishing gear recording system and monitor the use of non-selective fishing methods. 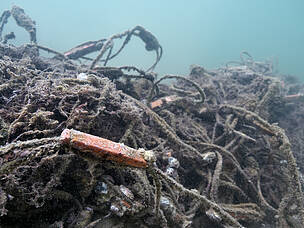