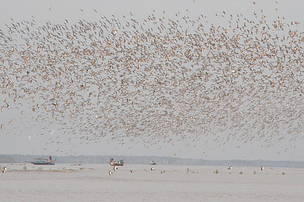 Asian Flyways
© WWF-Hong Kong
On the occasion of World Environment Day, WWF-Hong Kong is pleased to announce the successful award of WWF Asian Flyways Initiative (AFI) Grant to the Koshi Tappu Wildlife Reserve, Nepal and to two shorebird sites in Indonesia. The Grant under the Asian Waterbird Conservation Fund (AWCF) support WWF’s work to build the capacity of wetland stakeholders throughout the East Asian-Australasian Flyway (EAAF) and the Central Asian Flyway (CAF), and support its key objective of involving local communities in conservation work.

Peter Cornthwaite, CEO of WWF-Hong Kong said, “This year, World Environment Day focuses on the loss ofbiodiversity, highlighting the importance of combating the accelerating species decline and the degradation of the natural world. With some 19% of migratory waterbirds in the EAAF threatened with extinction, the AFI Grant can contribute to habitat protection for migratory waterbirds and support the conservation efforts of local people and communities.”

The AFI Grant given by WWF-Hong Kong to the Nepal site helps alleviate the pressing issue of the illegal hunting of the globally threatened lesser adjutant (Leptoptilos javanicus) in Koshi Tappu Wildlife Reserve. The project will conduct an outreach programme to understand local peoples’ attitudes towards the protection of this magnificent bird, engage them in species protection and tackle major threats the bird is now facing by encouraging a reduction in both the use of pesticides on agricultural land and hunting by fishpond owners. Nest surveys will also be carried out so as to identify the  environmental requirements in nesting site selection.

In Indonesia, two local communities will be trained to take part in waterbird monitoring programmes. Commenting on the two grants, Fion Cheung, Flyways initiative Manager for WWF-Hong Kong said, “In Banyuasin Peninsula, South Sumatra, the project team will work  with the local community they knew two years ago. The grant will be used to train aquaculture operators to monitor ponds located in the mangrove forest near the mudflats that are important high-tide roosting sites for migratory waterbirds. The other grant in Indonesia will support a three-year project in Pantai Cemara, Jambi, to enable local communities to collect shorebird monitoring data in support of advocacy efforts to persuade the government to designate the area as a Flyway Network Site under the EAAF Partnership.”

Simba Chan, one of the AWCF Committee members said, “The eastern coast of Sumatra is an important wintering site for many species of migratory shorebirds in the EAAF. Not enough work has been done there so far and the AWCF is an important step to enabling local communities to lead on bird monitoring work.”

WWF-Hong Kong is working with local communities and other individuals and organizations that care for the future of local people and nature in different parts of the World. WWF’s goal is to maintain the integrity and functionality of the EAAF and CAF to ensure that waterbirds can migrate between their breeding and wintering grounds via a network of sustainably managed wetlands, including Mai Po, while reducing the impact that people have on natural places, particularly in those areas that are important to both the diverse species they support and the livelihoods of local communities.