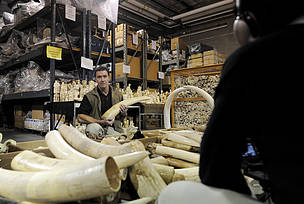 The outbreak of COVID-19 has brought wildlife trade into sharp focus. The illegal trade of wildlife is of particular concern for both human health and conservation. Wildlife trade is a highly significant threat to the survival of thousands of the Earth’s species. Actions taken by Hong Kong can help tackle the illegal trade and reduce its impact. With its free trade policy, geographical proximity to mainland China, and well-developed port infrastructure, Hong Kong, Asia’s World City, has unfortunately become a global hub for the illegal wildlife trade. Large seizures of elephant ivory and pangolin scales in the past year has shown how serious the problem is in Hong Kong.

“At the heart of global wildlife trafficking, Hong Kong certainly is strategically positioned to disrupt the transportation routes and financial hub of the trade. This new effort with ACAMS is a significant step to bridge the gaps in the financial systems that criminals exploit to move, hide and launder the proceeds from the illegal wildlife trade, enabling authorities to prosecute buyers and syndicates in the wider criminal network,” said Brian Gonzales, Head of Protection of Endangered Species, WWF-Hong Kong.

He adds: “This sends a clear and strong message that Hong Kong is no longer open for business to any illegal wildlife trade crime. The Government should at the same time significantly boost resources for enhancing law enforcement, prosecution and investigations. WWF-Hong Kong urges the Government to include wildlife crime offences under Schedule 1 of the Organized and Serious Crimes Ordinance (OSCO) to deter transnational criminal enterprises using Hong Kong as a smuggling hub.”

The initiative aims to help financial intelligence units and compliance investigators, and seeks to initiate regional and national operations targeting suspicious transactions or ongoing cases with red flags for illegal wildlife trade financial flows. The effort will also offer a free, first-of-its-kind certificate outlining the steps financial sector actors should take to identify, report, mitigate and remedy the risks associated with each stage of an illegal wildlife supply chain.

“While it’s long been considered outside the scope of ‘mainstream’ criminality, the illegal exploitation of the world’s wild flora and fauna and endangered animals is driven by the same profit-motive as human trafficking & modern day slavery, drug trafficking and other organized crime schemes,” said Angela Salter, Interim President of ACAMS. “The vast sums that can be generated by a single syndicate will typically move across multiple borders and through multiple entities, including traditional financial institutions,” she added.