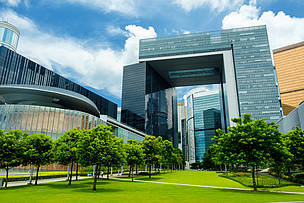 Central Government Office
© Shutterstock
We very much welcome today’s Chief Executive policy speech that the Hong Kong SAR Government will strive to achieve carbon neutrality before 2050. We look forward to seeing how the Government will update its “Hong Kong’s Climate Action Plan” in the middle of next year and the “proactive strategies and measures to reduce carbon emissions.”

We also support the initiative to promote sustainable aquaculture. Government should provide more incentives for businesses to source sustainable seafood, alongside  more public education work. Support for renewable energy to power these modern new fish farms should be provided.

We are disappointed with the lack of initiatives to protect Hong Kong’s biodiversity, given Hong Kong’s commitments, in the Hong Kong Biodiversity Strategy and Action Plan (BSAP), to greater collaboration with Greater Bay Area counterparts and hence to playing our part in China’s commitments to the Convention on Biological Diversity (CBD).

Specifically, we are concerned by the Chief Executive’s confirmation that the government will still press ahead with the Lantau Tomorrow project to reclaim 1,000 hectares of land to build artificial islands in Central waters. And of course, the carbon emissions generated by the reclamation, including the sourcing and transport of fill, will undermine the Government’s commitment on decarbonisation enormously.

“Throwing rocks into the ocean makes no sense,” says Dr David Olson, Director of Conservation, WWF-Hong Kong. “Unbalanced development can profoundly alter the natural environment and degrade its value as a recreation, ecotourism, and rural living hotspot, as well as a refugia for many threatened wildlife and plant species of Hong Kong. We need a vision for Lantau’s tomorrow that conserves the natural wealth of Lantau today, for future generations.”

The proposed East Lantau Reclamation project will grossly alter and degrade the natural environment of Hong Kong, in a manner that is both unnecessary and enormously expensive. Such construction will not only have enormous direct financial costs of construction, but also immeasurable cost due to the carbon footprint and the loss of biodiversity and ecosystem services.

According to WWF’s underwater sound study conducted in 2019, finless porpoises have been recorded in the proposed reclamation area, as well as rare pipefish, seahorse, and unique lizards found nowhere else in the world. Filling in a large area of the ocean in a key channel of the Hong Kong archipelago will dramatically change the hydrodynamics of current flows through the islands, in turn changing the supply of nutrients and fish larvae to the already stressed fisheries. Such pharaonic works in the ocean will alter water currents and create sediment plumes that will long damage beaches, navigation, and fisheries. The impacts are irreversible and inestimable that we can’t develop at this unbearable cost.

Dr Laurence McCook, Head of Oceans Conservation, WWF-Hong Kong says: “We urge the government to commit to a concrete, specific and timebound roadmap for increasing MPA to cover 10% of Hong Kong waters by 2023 and 30% by 2030. The MPA network should consist of science-based, strict no-take reserves, fisheries management zones, dolphin conservation zones, community-based fisheries reserves, and other MPA designations.”

As China prepares to host COP15 in May, only 5% of Hong Kong’s waters are designated or planned to be established as MPAs by 2023; this is not enough to fulfil Hong Kong’s obligations to China and the international community.

“Biodiversity loss is not just a conservation issue but is inextricably linked to the wellbeing of our societies and economies,” says Peter Cornthwaite, CEO, WWF-Hong Kong. “In fact, the latest Global Biodiversity Outlook (GBO5) report by the UN Convention on Biodiversity (CBD) published in September highlights governments' failure to meet internationally agreed goals set out in the 2010 Aichi Biodiversity Targets to protect global biodiversity. It’s time for Hong Kong to honour its BSAP commitments.

Global wildlife populations have already fallen by an average of 68 per cent since 1970, according to the WWF’s latest Living Planet Report, with freshwater biodiversity declining at a far faster rate than in oceans or on land. Nearly 90% of global wetlands have been lost since 1700 and are still being destroyed three times faster than forests, Hong Kong must take the lead by conserving all remaining local wetlands as a nature-based solution to climate resilience.

To address land supply for housing, the government should more comprehensively explore options such as rehabilitating and developing brownfield sites instead of resorting to reclamation. Hong Kong has extensive brownfields, which already require rehabilitation. The Planning Department published a brownfield study last year, concluding that there are 7,373 active brownfield sites covering 1,414 hectares in the New Territories. Earlier this year, eight clusters of brownfield sites, which equal to 36 hectares, have been identified by the Government as possible areas for the development of more than 20,000 units of public housing. Development of these sites would bring similar economic development benefits to Lantau Tomorrow, but at much lower financial and environmental costs to Hong Kong taxpayers.