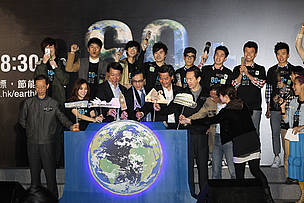 Our distinguished guests officiated the count-down ceremony and the buildings along the harbour turned off the lights
© Alvin Wong / WWF-Hong Kong
Tonight, Hong Kong is joining hundreds of millions of people in over 6,400 cities across 150 countries and regions, and every continent in a moment of unprecedented global unity to show the way forward on sustainability. Earth Hour 2012 begins at 8:30pm tonight for one hour and participation has reached record levels. The Hong Kong community, as in previous years, have shown overwhelming support for Earth Hour: The Government House, the Chief Executive's Office and Legislative Council Complex are participating in the lights-out event. In addition, over 3,300 companies and buildings, all universities and over 340 secondary and primary schools in Hong Kong have also pledged their support for WWF’s Earth Hour.

“Earth Hour itself might last just one hour, but its spirit surely goes beyond that. Our theme this year is ‘Go beyond the hour, set your own energy saving target’. We believe that every individual has the power to make a difference. With each of us having an energy saving target, we can reduce our energy consumption, and make Earth Hour every hour of every day,” says Trevor Yang, Chairman of WWF-Hong Kong.

Earth Hour is a symbolic event that clearly demonstrates that small actions such as turning off your lights for one hour can collectively make a difference. According to “Hong Kong Energy Index”, 26 percent more energy was wasted in the overall energy consumption in Hong Kong over the past two decades (1990-2008). This year, WWF is calling on people to support Earth Hour not only by turning off the lights for one hour in a year, but also by going beyond the hour and contributing to a sustainable future by doing their part at home every day.

Besides the WWF event at Cultural Centre Open Piazza, WWF also organized a series of activities during the day including a tram parade and street promotion to invite Hong Kong citizens to celebrate and witness this memorable event together. Just before the countdown, 150 maracas handmade by Earth Hour school ambassadors out of recycled bottles are being distributed to guests to count down with fun. The handmade maracas also demonstrate the spirit of maintaining a sustainable lifestyle. In addition, a number of spontaneous events will be held in homes and communities all over the city. Corporations have involved their staff in Earth Hour. In the catering industry, restaurants and hotels are dimming or switching off their lights. Shops have provided Earth Hour special offers and campuses are also participating in the lights-out event.

Standard Chartered Hong Kong 150th Anniversary Community Foundation continues to be the Lead Sponsor of Earth Hour in Hong Kong for the third consecutive year. (For the full sponsor list please see below). Mr Benjamin Hung, Trustee of Standard Chartered Hong Kong 150th Anniversary Community Foundation, Executive Director and CEO, Standard Chartered Bank (Hong Kong) Limited, says, “Earth Hour spreads a very important message – environmental protection is everybody’s business. We are honoured to again be the Lead Sponsor, and we call on all members of the business sector and the community to join hands to achieve a more sustainable future for the globe.”

Around the world, citizens in 150 countries and regions have confirmed that they would switch their lights off for Earth Hour 2012. This includes a number of international landmarks such as the Forbidden City in Beijing, the Eiffel Tower in Paris, Buckingham Palace in London, the Golden Gate Bridge in San Francisco, Table Mountain in South Africa, and the Christ the Redeemer statue in Rio de Janeiro as well as the Sydney Opera House.

Our distinguished guests officiated the count-down ceremony and the buildings along the harbour turned off the lights
© Alvin Wong / WWF-Hong Kong Enlarge
Like this article?