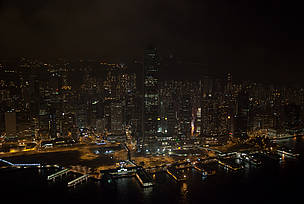 Hong Kong joined over 6,400 cities across 150 countries to celebrate Earth Hour in 2012
© Elson Li
WWF-Hong Kong is urging the public to support the world’s biggest collective environmental action by switching off their lights for Earth Hour at 8.30pm on March 23 (Saturday). The theme for this year’s Earth Hour is simple: 1 Earth, 1 City, 1 Hour.

WWF-Hong Kong is also encouraging people across the city to show continued support for Earth Hour by signing up to the campaign on wwf.org.hk/earthhour and sharing links through social media.

An online survey of 2,553 Hong Kong residents conducted by WWF-Hong Kong in the lead up to Earth Hour found that an overwhelming majority of people were aware of the Earth Hour and have learnt various energy-saving measures from the initiative. However, 63 percent said they lacked information on the energy efficiency of electronic appliances. More than half of respondents did not know the electricity usage of their household.

At the same time, only a third of respondents were aware of the rebate scheme provided by the two power utilities in Hong Kong and over 80 percent said they are more willing to join if the rebate is based on reducing their annual electricity consumption by a percentage compared with previous year’s usage. Fewer than 5 percent thought that the government was putting enough effort into addressing energy-saving policies.

“Earth Hour is not only about “turning the lights out” for an hour, it is a continuous movement driving real actions to save the planet we live in. Hong Kong people are ready to adopt sustainable low-carbon lifestyle beyond the hour. WWF urges transparency of energy efficiency information so that Hong Kong people are better able to make informed choices and turn every hour into Earth Hour”, Karen Ho, WWF-Hong Kong’s Business Engagement Leader for Climate said.

Everyday energy saving measures can not only help reduce our energy consumption, but will also lower household energy bills. Such measures include:
The WWF-Hong Kong Earth Hour website and social media initiatives will be launched at #HKSocial on 1 March, a monthly industry event featuring the latest trends, tips, insights and future forecasts involving social media at work and play.

Mr Alastair Bullock, WWF-Hong Kong Heads of Communications emphasised, "This year we wanted to bring this movement to social media through something new and unique. The website aims to bring everyone's commitment together in a beautiful, real time way and show that for one hour the people of Hong Kong can make a difference."

About Earth Hour
Earth Hour is a global environmental initiative run in partnership with WWF. Individuals, businesses, governments and communities are invited to turn off all non-essential lights for one hour on Saturday 23 March, 2013 at 8:30 PM to show their support for a sustainable planet. Earth Hour’s I Will If You Will concept invites individuals and organisations to challenge others to “go beyond the hour” by making an ongoing environmental commitment. Earth Hour began in Sydney, Australia in 2007 and by 2012 involved hundreds of millions of people of 152 countries more than 7,000 cities across every continent, becoming “the world’s largest campaign for the planet”.