WWF’s Earth Hour Brings the Lights Down in Hong Kong

Earth Hour 2013 victoria harbour
© WWF-Hong Kong
The world’s annual “Lights Out” event, Earth Hour 2013, successfully took place tonight, 23 March 2013 at 8:30pm. Hong Kong was the tenth city of over 7,000 across 152 countries and regions across to power down. The Hong Kong community, as in previous years, showed overwhelming support for Earth Hour: Government House, the Chief Executive's Office and the Legislative Council Complex participated in this year’s unforgettable lights-out event. In addition, over 3,800 companies and buildings, all universities and over 370 primary and secondary schools in Hong Kong also switched off and pledged their support for WWF’s Earth Hour.

“Earth Hour is a highly visible symbolic act, aiming to raise public awareness about energy saving and carbon reduction. According to data provided by the two power utilities in Hong Kong, electricity consumption in Hong Kong dropped by 4.5% during Earth Hour 2012. This drop is equivalent to saving 147 tonnes of carbon dioxide, which would require 6,300 trees to absorb over one year,” said Mr Edward Ho, member of WWF-Hong Kong’s Executive Council.

The Standard Chartered Hong Kong 150th Anniversary Community Foundation continued to be the lead sponsor of Hong Kong’s Earth Hour for the fourth consecutive year. Mr Julian Fong, Trustee of the Foundation; Chief Financial Officer, Asia, and Global Head of Country Finance said, “We strongly believe that it is our responsibility to support the long-term development of our community. We call on everyone’s support in preserving resources and protecting our environment. It is only through our collective effort, we will be able to build a sustainable future.”

The Earth Hour 2013 Countdown Event was held at Sky100 Observation Deck, ICC, the tallest building in Hong Kong and the fifth tallest building in the world. Mr Wong Kam-sing, JP, Secretary for the Environment and Earth Hour 2013 Ambassadors, Ms Karen Mok, Ms Kay Tse, Ms G.E.M. Tang and Sugar Club, together with other VIP guests witnessed the “hour of darkness” from a dizzying height of 393 meters above sea level.

Additionally, lead by the Macau Government Office for Energy Development Sector, major corporations, landmarks and government buildings also participated in Earth Hour by switching off the lights. A total of 13 hotels, including The Venetian Macau and the Grand Hyatt Macau will also be participating in a new initiative to extend Earth Hour to the first Tuesday of every month.

Other landmarks across the world have taken or are taking part, including the Bird’s Nest (Beijing National Stadium) in Beijing, Buckingham Palace in London, the Golden Gate Bridge in San Francisco, the Sydney Opera House, Tokyo Tower and Taipei 101. Copenhagen’s The Little Mermaid and Florence’s Statue of David are also switching off for Earth Hour for the first time this year. WWF-Hong Kong salutes all participants in Earth Hour 2013, and we are proud to have celebrated this worldwide action for the planet with hundreds of millions of like-minded people. 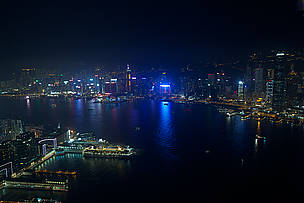 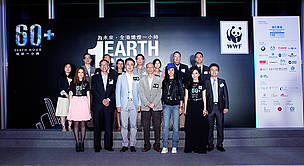