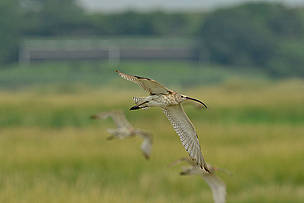 Eurasian curlews in Mai Po
© Neil Fifer
The world’s migratory waterbird populations are on the brink of disaster.

Each year, an estimated 50 billion birds – around 19 percent of the world’s 10,000 avian species – journey across the planet in search of food and warmth or to return to their breeding grounds. This astonishing migration is one of Earth’s greatest natural wonders.

Despite performing and surviving this magnificent feat for generations, at present, bird populations are disappearing in vast numbers and at great speed, particularly in places with dense human populations like East Asia. The region is a key part of the East Asian-Australasian Flyway (EAAF), but at the same time, it is also home to 45 percent of the human race.

Migratory waterbirds along the EAAF are showing a steep and rapid decline, and some are among the world’s most-threatened species. According to a 2011 report by the International Union for Conservation of Nature (IUCN), rates of decline in the region are among the highest of any ecological system in the world.

Some 33 waterbird species using the flyway are heading toward extinction and many others are facing losses of between five and nine percent per year. The Spoon-billed sandpiper, whose number is declining by 26 percent per year, could be extinct within a decade.

Bena Smith, WWF-Hong Kong’s Conservation Manager for Regional Wetland Projects, attended the Partnership for the East Asian-Australasian Flyway (EAAFP) Meeting of Partners in Alaska in June 2013. Along with other experts, he discussed the distressing situation for migratory waterbirds in the flyway, including that of the Baer’s pochard, a formerly common and widespread, but now critically endangered duck in Asia.

This duck was found to be “extremely abundant” during its migration through China in the early 1900s. Hundreds could be found across countries that formed the core of its former wintering range, including Bangladesh, Myanmar and Thailand. But a heavy decline in the duck’s population took place in the 20th century, and in the last few years their number has taken a nose-dive. An assessment in 2012 suggested that fewer than 1,000 now exist in the world, but field surveys in winter 2012/13 only located 45. The reason for the rapid population drop in the last few years is unknown, leading delegates at the EAAFP meeting to conclude that the duck is at risk of imminent extinction.

While each species is different and the precise reasons for the widespread population drops are not known as of yet, the IUCN report paints a stark picture, saying, “fisheries and vital ecological services are collapsing and ecological disasters increasing, with concomitant implications for human livelihoods”.

John Allcock, Manager for Habitat Management and Monitoring for WWF Hong Kong, says the biggest threat to migratory waterbirds is the disappearance and degradation of stopover sites along the EAAF.

“Birds are reliant upon many different sites in different locations,” Allcock says. “A bird may only rely on each stopover site for a few days, but if that site is lost, the bird may not survive migration.”

Many of these staging posts in East Asia consist of intertidal wetlands. Migratory waterbirds depend on these ecosystems because they are biologically diverse and rich in food sources, providing the ideal habitat for birds to rest and recharge before resuming their travels.

The IUCN report concluded that 51 percent of the wetlands in mainland China have been lost since 1980, along with 40 percentof Japanese wetlands, 60 percent in South Korea and 70 percent in Singapore.

The loss of these wetlands is directly related to the fast pace of coastal land reclamation occurring in this densely populated region, particularly around key coastal staging areas in the Yellow Sea. People are destroying the East Asian wetlands for short-term economic gain. This habitat destruction is compounded by a litany of other threats to waterbirds, including the damming of major rivers, pollution and hunting.

Mai Po Nature Reserve
Mai Po Nature Reserve is a bright spot in an otherwise grim picture. WWF Hong Kong has managed the 380-hectare site within Inner Deep Bay for three decades. The reserve acts as an education and research centre, and staff work on numerous projects and initiatives involving wetlands and waterbirds. Most importantly, the reserve is a conservation centre that offers a temporary home for thousands of birds from over 400 species. Nearly 40,000 waterbirds were recorded at Mai Po in January this year.

WWF’s active management of the reserve’s numerous habitats aims to maintain and increase their biodiversity, and thus attractiveness, to waterbirds. Various techniques are employed, such as the restoration and enhancement of freshwater ponds and gei wai (shrimp ponds), the natural management of vegetation through the use of buffaloes, and the monitoring of water quality in freshwater ponds. These efforts were recently recognized when WWF-Hong Kong and Mai Po Management Committee received the BirdLife International Conservation Achievement Award 2013.

Though Mai Po is well managed, it is only one of a network of stopover sites. “However much protection we give to the species in Hong Kong, if the other sites they use elsewhere are destroyed, we will still see declines in their populations,” Allcock says.

Additional Threats
Another threat to the birds is illegal hunting. In China and Southeast Asia, it is a common practice for people to catch birds for food or for the caged-bird trade. Trappers spread mist nets – nylonnets that are almost invisible to birds – in areas where avian populations are known to congregate and capture all manner of birds. Once the more valuable specimens have been extracted, many more species that have been trapped alongside them are left to die in the nets.

This problem received global attention in late 2012, when it was discovered that hunters had placed 460 mist nets around a wintering site for the Spoonbilled sandpiper (a critically endangered species of which fewer than 500 remain in the world) in Fucheng, in southwest Guangdong Province. Other threatened or endangered birds, such as the Eurasian curlew and the Yellow-breasted bunting, have also recently been found dead due to these nets.

Major steps need to be taken immediately to reverse the current trends. If this reversal occurs, species declines could be halted and the EAAF would likely retain its ecological function and biodiversity in the future. In recognition of this urgency and the need for international cooperation to conserve species which cross country boundaries, in February 2012, WWF-Hong Kong launched the “Conservation Priorities for Migratory
Shorebirds of the East Asian-Australasian Flyway” project to identify shorebird species of the highest importance for conservation action and their critical sites in the flyway and to produce a flyway-wide Conservation Plan. The Plan aims to stabilize populations of the priority shorebird species by guiding national governments, conservationists, environmental NGOs and researchers to implement actions to conserve them in the EAAF.

While this is an encouraging start, the work of preserving and reversing the manmade damage to the East Asian wetlands and the waterbird populations that depend on them needs to be implemented more quickly. In the end, it will be humanity that determines the fate of our fellow travellers, as only we hold the power to change our habits and save the birds. 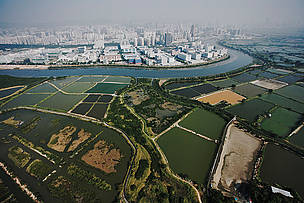 Despite its location close to rapidly developing Shenzhen, Mai Po Nature Reserve is a temporary home for thousands of migratory waterbirds.
© Martin Harvey / WWF Enlarge
Like this article?