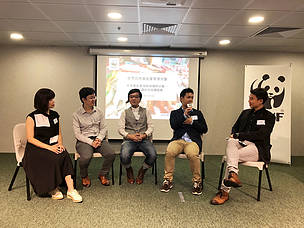 Chinese caterers share their insights at a WWF-Hong Kong-organized Sustainable Seafood Seminar
© WWF-Hong Kong
Sustainability and legal issues associated with traditional seafood products were brought to the fore at a recent WWF-Hong Kong-organized forum, the “WWF Sustainable Seafood Seminar for Chinese Catering”. A total of 80 representatives attended the seminar, including those from Chinese restaurants from hotels, retailers, suppliers, clubs and the government.

The seminar opened with Dr Allen To, WWF-Hong Kong’s Manager for Oceans Sustainability, asking participants to imagine a scenario in which the depletion of marine resources leads to the loss of Hong Kong’s traditional dining culture. Dr To suggested that cooperation between different concerned sectors dealing with overfishing and legal issues could provide the synergy that would lead to win-win solutions for all the stakeholders.

The first session of the seminar had a focus on problems related to dried seafood, especially shark fin and South African abalone. Tracy Tsang, WWF-Hong Kong’s Senior Programme Officer for Oceans Sustainability, explained that the shark is the top predator in the ocean and that its removal from the food chain would lead to a cascading effect that could cause the decline of other species’ populations or even a collapse in the ecosystem. Currently about one fourth of shark and related species are threatened with extinction from overfishing and the main driver is the demand for shark fin. Tsang added that 12 shark species are already listed on CITES Appendix II, meaning that these species and their products can only be traded internationally by permit. However, in reality illegally sourced or traded shark fin in the market is not uncommon. She encouraged Chinese restaurants that wish to avoid the risk of promoting illegal products to find sustainable seafood alternatives.

Menus that feature shark fin are also likely to list South African abalone, also perceived as a prestigious item in Chinese cuisine. Wilson Lau, TRAFFIC East Asia Programme Officer, shared the results of the organization’s analysis of the issues associated with the trade and fishery of the product. Firstly, poaching and the drugs trade are often linked. Lau further pointed out that it was estimated that of the South African abalone sold on the world market in 2015, only 35 percent was legally traded. More than 90 percent of South African dried abalone exports are destined for Hong Kong.

Although the majority of dried seafood traders surveyed in the Hong Kong market are aware of the issues, there are still two major loopholes that allow problems to persist. There are virtually no regulatory controls on the abalone trade and no laws preventing abalone poached in South Africa from being sold locally. Furthermore, by the time poached abalone lands here, it is no longer traceable to the black market, emerging from the Customs process as a legitimate product, available over‐the‐counter like any other legally traded product.

Well-known local dried seafood trading company, Hai Sang Hong’s General Manager, Kenneth So, confirmed in a panel discussion that it is indeed very difficult for traders to identify whether dried abalone is legally caught. However, the poached product is often dried in poor conditions and is therefore often of worse quality. Lau recommended to the panel that South Africa should seek the inclusion of its abalone into CITES Appendix II or III, with the cooperation of the Hong Kong Government and other importing countries.

Traditional Cantonese banquet cuisine also prominently features reef fish such as grouper and the humphead wrasse. Professor Yvonne Sadovy, School of Biological Sciences and Swire Institute of Marine Science for University of Hong Kong, said that Hong Kong is the global centre for the international live coral reef fish trade. Due to the huge demand for reef fish, the trading area of these fish has expanded rapidly since the 1970s, mainly in developing countries in South East Asia. She further noted that many imports to Hong Kong are not reported and hence are illegally traded. Professor Sadovy recommended that the government should tackle legal problems by more effectively regulating Hong Kong registered fishing vessels importing and re-exporting live fish, as these vessels are suspected to have under-reported their trade statistics.

Stan Shea, Marine Programme Director of Bloom Association Hong Kong, then shared why and how we should source and consume sustainable seafood. According to the Food and Agriculture Organization of the United Nations, Hong Kong’s population annually consumes about 70 kg of seafood each, far more than the global average of 20 kg. That means the seafood choices we make have an extremely important impact on the world’s oceans. Shea told participants that more sustainability-related eco-labels such as MSC and ASC are available in the market, meaning stakeholders can support sustainable seafood more easily by serving and consuming these products. In addition, there are more lists available showing which restaurants provide sustainable seafood.

Industry leaders including Chef Lee Shu-tim, Executive Chinese Chef of Grand Hyatt Hong Kong, Mr Lee Choi-wah, Chairman of Hong Kong Chamber of Seafood Merchants and Mr Mark Kwok, Director of Aquaculture Technologies Asia Ltd joined the speakers and Jovy Chan, WWF-Hong Kong’s Senior Officer for Oceans Sustainability, for the panel discussion. With the aid of insights provided by the industry, it is apparent that the sustainability of fisheries involved in the live seafood trade is a challenging issue to tackle but these industry players are taking the lead in address all these, step by step.

The seminar was just a start in engaging the Chinese catering sector – it’s a situation that can’t be changed without continuous efforts by all segment of the industry, including hotels, Chinese restaurants, Western restaurants, retailers and suppliers. Government action is also important in facilitating the process. Together, we can create a sustainable future for humanity and the oceans! 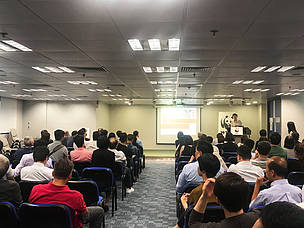 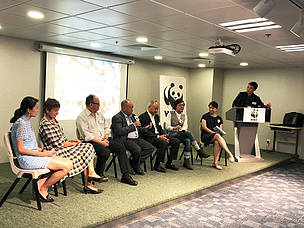