26 March 2007
© WWF HK
WWF launched a convenient, easy-to-use Seafood Guide today to promote the consumption of green and sustainably produced seafood. This is the first seafood guide in East Asia to cover a wide range of seafood using the latest information. Consumers and corporate diners are encouraged to actively use the Guide as a reference when buying seafood at markets and dining out. The project is sponsored by JNC Nature Fund.

More than 60 popular seafood species are included in the Guide. "These species were assessed using rigorous criteria for wild caught, or farmed species, and then verified by both local and international experts, particularly from the places where these seafood are produced or harvested. Based on the results of the assessment, they were placed into three categories; Green - "Recommended", Yellow – "Think Twice" and Red – "Avoid" resembling a traffic light system," explained Mr Clarus Chu, Marine Conservation Officer, WWF Hong Kong.

Consumers are advised to consume Green – "Recommended" species as they come from well managed fisheries such as the Marine Stewardship Council (MSC) certified Western Australian rock lobster and Alaskan salmon fisheries, or well practised aquaculture operations. Consumers are advised to stop selecting Red – "Avoid" species such as the Humphead wrasse, Hong Kong grouper and South African abalone as they are harvested or produced in ways that have caused seriously negative impacts to the marine environment. The Yellow – "Think twice" species, like some farmed grouper and mud crab are in-between the "Recommended" and "Avoid" categories, and seafood lovers are advised to consume them warily.

"Consumers have the power to make a big difference in protecting globally depleted marine resources through their purchasing decisions, and the seafood guide is a great tool to provide information for consumers to make a wise choice. We all need to act responsibly to ensure the oceans are not stripped bare for future generations," said Mr Markus Shaw, Chairman, WWF Hong Kong.

"As a seafood lover, I want to see seafood being readily available in the future. Being the WWF Marine Ambassador, I pledge to support the Guide by using it as a reference when buying seafood in the market and to help spread this important conservation message to my friends to encourage them to consume the "Green- Recommended" seafood," said Mr Ekin Cheng, Marine Ambassador, WWF Hong Kong.

WWF plans to periodically update the seafood guide to reflect changes in the way that seafood are produced and harvested. Improvements will result in upgrading of species towards "Green- Recommended" in subsequent editions of the Guide. It is hoped that one day there will be no "Avoid" category. The Seafood Guide can be downloaded from the WWF website, or picked up from WWF offices. For details, see wwf.org.hk/seafood

Hong Kong has a huge appetite of seafood. The UN Food and Agriculture Organisation (FAO) in 2005 revealed that the average seafood consumption in Hong Kong was about 58 kg per person per year, making us ranked at number 4 highest in Asia and 21 globally. To meet this huge demand, seafood are imported from over 30 countries, from as close as mainland China and as far as Argentina. In fact, our love of seafood already means about 90% of seafood comes from outside Hong Kong, with only about 10% of seafood produced locally including the South China Sea.

Global and local fisheries resources are facing major problems. In 2007, FAO reported about 75% of all major fisheries are fully fished, over-exploited and even depleted. Scientists reported that commercially important big predatory fish like Bluefin tuna, Swordfish and Atlantic cod were so heavily harvested that more 90% of them have been lost within the last 50 years, and a recent study also projected that if actions are not swiftly taken the fish stocks of major marine ecosystems would collapse by the middle of this century. Close to home, the South China Sea also shows worrying signs of over-exploitation. In Hong Kong, a study in 1997 showed that 12 out of 17 commercially important fisheries species are over-fished and the remaining are already fully exploited.

It is often been suggested that aquaculture will be the ultimate solution to alleviate the problems of wild fisheries and it has rapidly developed in recent decades, particularly in South East Asia, Central America and China. However, uncontrolled or ill-management operations of these practices can lead to pollution and spreading of disease to the natural environment. "So those who buy and sell seafood without considering how it is produced may be unwittingly contributing to the destruction of marine ecosystems across the globe" noted Mr Clarus Chu.

"Now is really the time for the public to actively involve in protecting our marine resources. Be a responsible consumer and show your support for the environment," concluded Mr Shaw.

Information of Marine Stewardship Council — MSC can be found at the following website: http://www.msc.org 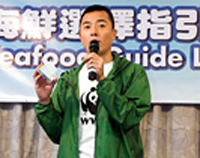