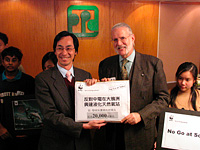 24 Jan 2007
© WWF HK
Over 20,000 people have joined WWF to express their views through WWF's petition and signature campaign to reject Soko as the preferred site for the Liquefied Natural Gas (LNG) Terminal before the deadline of public consultation on the Environmental Impact Assessment (EIA) report of CLP's proposal for LNG Terminal on 25 Jan 2007.

"WWF is delighted that over 20,000 petitions and signatures were collected within just 2 weeks. It clearly shows that the Hong Kong people have serious concerns and reservations on CLP's proposed LNG Terminal site at Soko. WWF urges the public to act swiftly to request the government to create an important refuge for Chinese white dolphin and other marine species free from disturbance," said Mr Eric Bohm, CEO, WWF Hong Kong.


After reviewing the EIA report, WWF considers that the report is misleading in the information provided to guide the public into believing the Soko option is preferable and environmental acceptable. "Our major concerns on the EIA report include inadequate information regarding the future gas supply, the conflicts between the objectives of Marine Parks and an LNG Terminal, a lack of real commitment in protecting Chinese white dolphin and other marine species and down playing of the Black Point option" said Clarus Chu, Marine Conservation Officer, WWF Hong Kong.

While there are uncertainties and disputes on the duration that CLP can receive natural gas supply from the Yacheng gas field, it is unclear that there is even an urgent need for a LNG terminal in Hong Kong.

WWF seriously doubts that a Marine Park and an LNG terminal at Soko could be compatible, given that the terminal will lead to consistent large scale maintenance dredging work, which benthic communities will take years to recover from, continuous discharge of antifouling chemicals and extreme changes of seawater temperature in the marine environment. The objectives of Marine Parks are to protect, enhance and restore marine life and environment and provide a refuge from dredging.

"How much longer can the Chinese white dolphin tolerate these long- and short-term threats before they disappear in Hong Kong?" said Eric Bohm, CEO, WWF Hong Kong, "The Chek Lap Kok Airport had already permanently destroyed large area of their habitats, the present proposed LNG terminal at Soko claims the impacts is temporary and the proposed Hong Kong-Zhuhai-Macau Bridge, the Logistic Park, the Port Terminal No. 10 would damage the last remaining dolphin habitat. The public should seize this last opportunity by saying ‘No Go at Soko' to protect our dolphin." 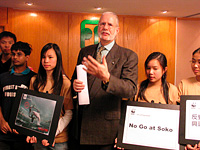