WWF’s response to Chief Executive Carrie Lam’s 2018-19 Policy Address
© WWF-Hong Kong
WWF-Hong Kong is disappointed with Chief Executive Carrie Lam’s second policy address to the Legislative Council on 10 October 2018, in particular with her tackling land supply issues by down-playing a ‘brownfield first’ development policy, while highlighting East Lantau Metropolis Reclamation as the primary option.  Conservation should not be compromised for the sake of development.  We are adamant about making brownfield development a priority, and expanding marine protected areas (MPAs)  before considering reclamation.  It’s our vision to transform Hong Kong into Asia’s most sustainable city, where nature is conserved, carbon emissions are reduced, and consumption is environmentally responsible.

“We are deeply disappointed with Ms. Lam’s reclamation proposal because the final report from the Land Supply Task Force will only be released by the end of this year.  Her proposal in the policy address shows that she not only ignored the process, but also the result of the land supply consultation.  Also, the Land Supply Task Force had previously mentioned that that only 1,000 hectares will be reclaimed, which will fulfil Hong Kong’s housing needs and future development.  There is no justification to increase the reclamation area to 1,700 hectares.  The reclamation of East Lantau Metropolis will be the largest reclamation project in Hong Kong’s history, however, the loss of habitat and change of hydrology will be permanent, and bring forth a huge negative impact on marine ecology and the livelihoods of Hong Kong fishermen. The damage from reclamation is irreversible and the health of our sea will, unfortunately, further deteriorate”.

Earlier this year, WWF was encouraged by the government’s actions to phase out the ivory trade by 2021 and the increases in maximum penalties for wildlife crimes offences.  We also welcomed the Feed-in tariff (FiT) rate set at $3-5/kWh for small-scale solar and wind system installations and the relaxation height restriction; and the government’s commitment to green finance.  These are initiatives that will help achieve the goal of making Hong Kong Asia’s most sustainable city. 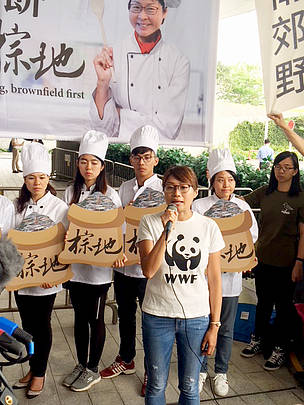