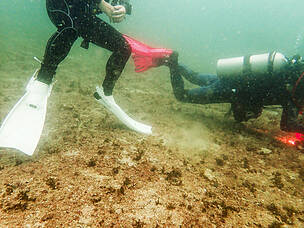 Hand and fin contacts were the most common among other contact behaviours.
© WWF-Hong Kong

The summer diving season is fast approaching. Following up the “ECF – Dive for Ocean” project last year, WWF has just launched a new set of dive-training cue cards to address the persistent lack of conservation information provided in scuba diving training. There is an urgent need for divers to learn about conservation: a survey conducted by citizen scientists during the last diving season has revealed that divers tend to underestimate their impact on the marine environment. One troubling statistic stands out – scuba divers in Hong Kong come into contact with corals as many as 200,000 times per year.

The survey was conducted by 52 citizen scientists between June and December 2021. Its aim was to better understand divers’ behaviours and their potential impacts on the marine ecosystem. A total of 102 recreational divers were observed during the survey, with 1,088 seabed contacts recorded, including 124 direct coral contacts. Hand and fin contacts were the most common, accounting for 70% of the total.

Although scuba divers generally have a high environmental awareness, the study uncovered a significant gap between perceived and actual diving behaviour. Divers were observed to have an average of 10.7 contacts with the seabed per diving, around six more contacts than they thought they had. Additionally, diving qualifications and experience are critical factors governing the likelihood of seabed contact. This means that less-qualified divers tend to have more seabed contacts, highlighting that diving training is vital to establishing responsible diving behaviours.

Kelvin So, Project Manager, Oceans Conservation at WWF-Hong Kong, says, “Recreational scuba diving in Hong Kong is becoming more and more popular and we are seeing a growing number of people taking diving certification courses, especially in the summer. However, there is a big gap between acquiring diving skills and becoming aware of ocean conservation priorities. A previous survey showed us that 60% of diving instructors agreed there is lack of conservation information in current scuba diving training.”

To address this issue and promote ocean-friendly scuba diving, WWF-Hong Kong designed a new set of dive-training cue cards with conservation messages. Designed with proactive help from the diving community, the cue cards contain a coral distribution map of Sharp Island, diving instructions and information on the relevant corals. They are a useful training tool for diving instructors, helping them to be mindful when choosing training sites, equipping their students with basic coral knowledge, and ensuring they adhere to a code of conduct to keep a distance from marine creatures. The diving cue cards include:

Slate 1: Sharp Island dive-training guide map
Illustrated based on the findings of a transect survey conducted by 35 advanced divers and instructors, this dive-training guide map depicts the distribution of corals and sandy areas around Sharp Island. As the first map of its kind in Hong Kong, it will be invaluable in helping diving instructors choose suitable sandy areas to conduct training exercises.

Slate 2: Pre-dive briefing pack and code of conduct for scuba divers
This pre-dive briefing pack and code of conduct were co-created by WWF-Hong Kong and 80 partnered diving instructors, instructor trainers and course directors from the four major diving agencies: PADI, NAUI, SDI and SSI. The briefing pack includes a series of reminders for students to pay attention to – both before they enter the water and when they enter a coral area. The code of conduct sets appropriate rules for divers to follow – for example, “make sure your gear is fastened”, “control your buoyancy”, “be aware of your kicks”, “avoid contact with any marine organisms”, and several more.

“Sharp Island is a popular diving site because of its rich biodiversity and high accessibility. It is also one of the seven priority sites for marine conservation identified by Hong Kong experts. Launching this pilot project at Sharp Island illustrates how significant and simple it will be to integrate conservation into recreational activities with strong partner support. WWF is advocating for 30% of Hong Kong waters to be designated as Marine Protected Areas by 2030 with effective site-specific management plans. We continue to urge the government to implement a roadmap soon to safeguard our precious marine resources”, concludes Lydia Pang, Senior Manager, Oceans Conservation, WWF-Hong Kong.

Hand and fin contacts were the most common among other contact behaviours.
© WWF-Hong Kong Enlarge 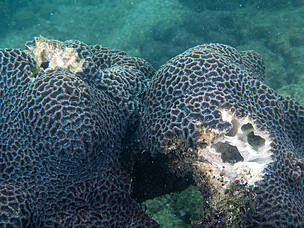 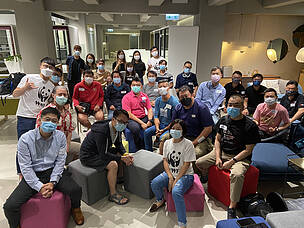