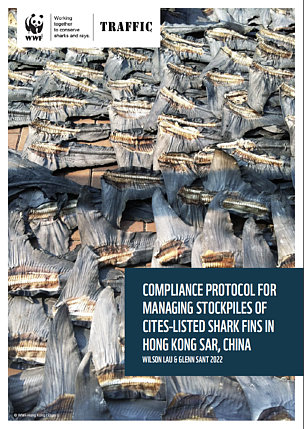 (Hong Kong – 14 July 2022) Today, WWF and TRAFFIC released a major new protocol that will regulate the trade of shark and ray products. The Compliance Protocol for Managing Stockpiles of CITES-listed Shark Fins in Hong Kongcovers shark and ray products listed on the Convention on International Trade in Endangered Species (CITES), and provides a management framework for pre-CITES shark fin stockpiles. The protocol was announced on Shark Awareness Day when we are reminded that 37% of the world’s sharks and rays are threatened with extinction.

The international trade in CITES listed shark and ray species requires products to be from sustainable and legal sources. Key to ensuring CITES requirements are met is that existing stockpiles of fins, that contain fins from species that were traded before their listing on CITES, are adequately managed and monitored so they don’t offer opportunity for topping up with illegal product. The protocol has been designed to ensure management in Hong Kong SAR is up to the task of preventing the laundering of shark fin through existing stockpiles.

Although more endangered shark and ray species have been added to CITES Appendix II in recent years, verifying legal products and managing existing stockpiles still presents a challenge for importing countries and territories such as Hong Kong.

Added to this is the issue of trafficking: organised criminal networks primarily use marine shipping for wildlife trafficking and appear to be taking advantage of the large numbers of container ships coming into Hong Kong to reduce the likelihood of detection. These practices are evident in the amount of shark fin seized in Hong Kong, which increased from roughly 1 tonne in 2014 to 29 tonnes in 2020.

Glenn Sant, Senior Advisor, Fisheries Trade and Traceability at TRAFFIC explains, “Fundamental to the concept of shark conservation is ensuring that the trade is only in legal shark fins. This involves certifying that the fins are derived from legal sources and, once imported legitimately, ensuring that there are no opportunities to swap these for illegal fins in stockpiles, i.e. laundering illegal fins so that they appear to be legal. Stockpiles of shark fins need to be properly managed by importing countries, so no illegal practices take place which undermines the conservation efforts of CITES and other  organisations.”

The new protocol sets out guidelines on the legal trade of CITES-listed shark fins, encompassing every stage from the location of import to the retail trade, and is divided into three parts. The first section highlights the importance of registering CITES-listed shark fins and establishing a regulatory regime for product labelling and segregation. Currently, no trade records are kept on CITES-listed shark fins in Hong Kong, as the territory does not require traders of non-live species listed on CITES Appendix II to register for a possession license. This makes it very likely that fins from CITES-listed sharks may be stockpiled in Hong Kong without the requisite CITES documentation. This section also recommends that all stockpile holders submit data on product quantities and that all stockpile data be made public.

Part two of the protocol expands on the current information system and on managing traceability. A separate but interoperable system is suggested to track trade flows. This system should be jointly established by the Hong Kong government's Agriculture, Fisheries and Conservation Department and the Customs and Excise Department and used to store information about possession licenses and registered stockpiles to track changes in stock volumes. Traceability tools such as SharkTrace should also be introduced to verify the source of shark and ray products and provide a straightforward way to distinguish between legal and illegal products.

Part three lists measures for the monitoring, control, surveillance, and enforcement of the shark fin trade that will become necessary once the protocol is implemented.

The new protocol offers a solution to combat the illegal shark fin trade and will help drive a more sustainable, transparent and traceable fin trade. WWF and TRAFFIC recommend that the Hong Kong government start the preparations and consultations needed to implement this protocol immediately. We also recommend that the three areas covered by the protocol be implemented holistically – this will allow Hong Kong to keep up with the best practices implemented in other countries and territories.

Gloria Lai, Manager, Oceans Sustainability at WWF-Hong Kong, concludes, “Sharks and rays play a key role in sustaining the health of marine ecosystems and contribute to the well-being of local communities around the globe. Sadly, their population has dropped significantly despite the decline in shark fin soup consumption. As a major trade hub, Hong Kong's actions to fight the illegal shark fin trade send strong messages to source countries. Implementing this protocol would send another important message that Hong Kong is determined to enforce a comprehensive management framework to improve, control and monitor the shark fin trade.”