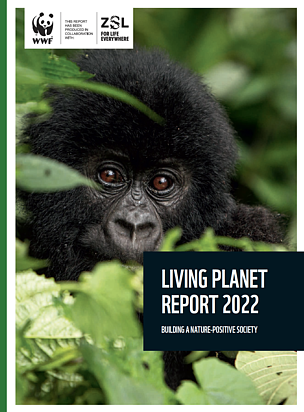 According to WWF’s Living Planet Report (LPR) 2022, global populations of vertebrate species have declined by an average of 69% since 1970. The report shows that habitat degradation and loss is still the biggest threat to nature at present; however, if global warming cannot be limited to 1.5°C, climate change will likely become the dominant cause of biodiversity loss in the coming decades. The report presents a stark outlook for the natural world and urgently warns governments, businesses and the public to take transformative actions to reverse the destruction of biodiversity.

Integral to the report, the Living Planet Index (LPI) acts as an early warning indicator on the health of nature. The latest LPI monitored trends on almost 32,000 populations of 5,230 wildlife species around the world, including mammals, birds, fish, reptiles, and amphibians – the largest dataset ever examined by the LPI. The results reveal that wildlife populations in tropical regions are plummeting at a particularly dramatic rate: between 1970 and 2018, monitored populations in Asia Pacific dropped by 55% on average; while Latin America showed the largest regional decline, at 94%.

Dr. Bosco Chan, Director, Conservation of WWF-Hong Kong, commented that, “Human activities are destroying and fragmenting natural habitats, leading to a precipitous decline in global biodiversity; wetlands for example, have declined by 90% globally. The report also highlights that freshwater biodiversity has plunged over the past decades, with 83% decline in monitored freshwater populations in the last 48 years, the largest decline of any species group studied. Freshwater is essential to our survival and well-being; however, freshwater ecosystems and biodiversity have been grievously impacted by threats like habitat degradation and loss, pollution, overexploitation, and invasive species. There is no time to waste to fix our relationship with nature. Hong Kong is blessed with a diversity of natural habitats and wildlife, and it is our responsibility to safeguard this natural heritage.”

Notably, the report emphasises that the world is facing interlinked double emergencies: human-induced climate change and biodiversity loss, occurring as an expanding human population and growing economy demand ever-greater amounts of energy, food and other resources. If we cannot limit global warming to less than 2°C, preferably 1.5°C, climate change will likely become the dominant cause of biodiversity loss. Already, about 50% of warm-water corals have been lost due to various threats. Global warming of 1.5°C will result in the loss of between 70% and 90% of warm-water corals; while more than 99% will be lost if warming reaches 2°C. The clock is ticking for nature conservation and restoration.

World leaders are due to meet at the 15th Conference of Parties to the Convention of Biological Diversity (CBD COP15) this December for a once-in-a-decade opportunity to course-correct for the sake of humankind and the planet. WWF is advocating that leaders commit to a Paris-style agreement that is capable of reversing biodiversity loss to secure a nature-positive world by 2030.

Hong Kong must play its part in contributing to global targets by adopting a holistic nature conservation policy. The government should set out evidence of any gains or losses in populations and species of conservation concern. WWF believes that a regular biodiversity indicator report is also needed to monitor biodiversity status and trends. Biodiversity and climate change should also be considered in Hong Kong’s development plans, to maintain ecology integrity and habitat connectivity and promote future sustainable development.

Nicole Wong, CEO of WWF-Hong Kong added, “Climate change and biodiversity loss are not only environmental issues; they are deeply linked to the health and well-being of economies, societies and all of humanity. They must be addressed together, immediately. We need to mainstream conservation, ensure that environmental considerations are at the core of all our future decisions and adopt nature-based solutions. The world needs transformative change to reverse these terrible declines – this requires each and every one of us to act, now.”