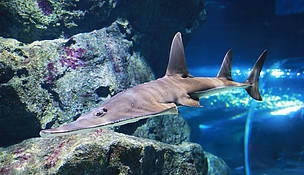 Giant guitarfish (Rhynchobatus djiddensis)
© Chonlasub Woravichan
In the International Union for Conservation of Nature latest update to their Red List of Threatened Species (the ‘IUCN  Red List’), almost 9,000 new species have been assessed as facing threats of extinction.  According to the IUCN Red List, 28,338 species are threatened with extinction, out of total 105,732 species being assessed. Not a single species was recorded as having improved in conservation status. WWF urges for urgent enforcement to deter illegal trade on wildlife in order to alleviate this dangerous loss of nature that underpins all life on Earth.

According to IUCN, human activities are pushing an increasing number of species to the edge of extinction. Overfishing has led to two entire families of extraordinary rays to teeter on the brink, while illegal logging has put Madagascar’s endangered rosewoods at greater risk.

Wedgefishes and giant guitarfishes, collectively known as ‘Rhino Rays’, are now the most imperilled marine fish families in the world. Closely related to sharks, Rhino rays are found in shallow warmer waters around the world.  Rhino ray meat is sold locally where caught, but the fins are highly valued and internationally traded for shark fin soup, where Hong Kong accounts for about 40% of the shark fin trade globally, we have a major role to play to reduce shark fin consumption. "The extent of the Rhino rays declines is shocking. We need to do more to protect these species in the water," said Dr Andy Cornish, WWF's global coordinator for sharks and rays. "There is very little scope for sustainable fishing rather we need to urgently find and protect their most important habitats. But, above all, the Convention on International Trade in Endangered Species of wild fauna and flora (CITES) must act quickly to list these species, in order to regulate international trade. The next meeting of the Conference of the Parties to CITES (CITES CoP18) will take place in August, and will consider proposals to regulate trade in these species."

The Hong Kong Government has an important role in wildlife conservation.  Brian Gonzales, WWF-Hong Kong's Head of Protection of Endangered Species, “In 2018 alone, Hong Kong authorities seized over 225 tonnes of endangered rosewood with an estimated black market value of almost HK$16 million. The IUCN Red List remains a leading diagnostic tool in upgrading species onto CITES protection. Criminal syndicates are tenacious, but adopting tools commonly used to fight drug lords and other forms of organized crime, including anti-money-laundering techniques and financial investigation help us chip-away at the very fabric that keeps them strong. The government must continue to strictly implement CITES, ensuring that the relevant regulations are effectively and comprehensively enforced at port and at business level. Hong Kong’s wildlife crime offences should be included under Schedule 1 of the Organized and Serious Crimes Ordinance (OSCO) to further deter transnational criminal enterprises who use Hong Kong as a route for wildlife smuggling.”