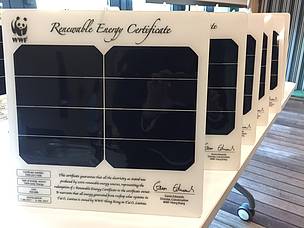 Hong Kong’s First Renewable Energy Certificate
© WWF- Hong Kong
The burning of fossil fuels to generate electricity is Hong Kong’s primary source of greenhouse gas emissions and makes up 68 per cent of our city’s carbon footprint. Currently, Hong Kong’s electricity fuel mix sees over 70 per cent of energy generated by fossil fuels, while only 0.1 per cent is generated by renewable energy. WWF-Hong Kong aims to change this situation by inspiring the citizens and businesses of our city to participate in significantly speeding up the development of renewable energy. By 2030, we want at least five per cent of the city to be powered by local renewable energy, and to see a reduction in overall absolute carbon emissions of at least 30 per cent (using 2005 as a baseline).

Distributed Solar – a new choice for the community

The Paris Agreement on climate change, signed by 196 nations, sets clear targets for cutting carbon emissions. Countries that are part of the agreement are required to cap the global temperature rise to “well below 2°C” by the end of this century. Hong Kong’s coming low-carbon transition will require the active participation of both ordinary citizens and the business community. By working together, we can move Hong Kong towards becoming a sustainable, net-zero carbon city. A key factor in this transition will be increasing our production and utilization of renewable energy.

In June 2016, WWF-Hong Kong launched our ‘’Solarizing Tai O’’ project. With the solid support of the Tai O community behind us, we installed three local on-grid solar photovoltaic (PV) systems on the rooftops of village houses. The total system size is 6 kW, with an annual solar energy generation of 6,000 kWh to 7,000 kWh. These distributed solar energy systems provide an alternative clean energy supply for Tai O villagers that powers public lighting systems and contributes a portion the electricity used in their households. To ensure the stability and reliability of the system, we record all data through an online monitoring platform and a weather station. The project demonstrates solar power’s great potential in Hong Kong from both an environmental and an economic perspective. It also underlines the continuing need for a supportive government policy – specifically, a feed-in tariff which guarantees that all electricity generated will be purchased at a preferential rate from power companies – to encourage the installation of such systems across the city.
Hong Kong has a clear advantage when it comes to solar energy: our unique geographical position means that we receive a large amount of solar radiation: around 1,350kWh/m2 annually. This indicates that the full implementation of rooftop solar across the city would bring us greater benefits when compared to neighbouring places like China and Japan. Research conducted by the Central Policy Unit in 2013 revealed that the full utilization of rooftop solar could generate over 4,000 GWh of electricity per year, potentially covering more than 10 per cent of Hong Kong’s electricity consumption. Investments made in rooftop solar will not only help kick-start a low-carbon energy transformation, they will also bring tangible economic benefits to the city.

WWF-Hong Kong is now offering a new programme that will help companies support renewable energy: Hong Kong’s first-ever Renewable Energy Certificate (REC) scheme. These certificates allow companies to purchase energy that is guaranteed to be 100 per cent solar – generated from a renewable and plentiful resource: the sun. The programme encourages businesses to take part in the development of local renewable energy, allows them to offset the company’s carbon footprint, and helps accelerate Hong Kong’s transition to a climate-resilient economy.

How can my company apply for a Renewable Energy Certificate?

The total number of certificates issued will depend on the total amount of solar energy generated by the systems in Tai O. At the moment, only 15 certificates are being offered, exclusively for companies and private partners of WWF. Each certificate has a unique identification number and is marked with the amount of renewable energy it represents and an issuing period. The application details are as follows:
Ms Olivia To
Public Engagement Officer, Climate
WWF-Hong Kong
oto@wwf.org.hk / 2161-9616 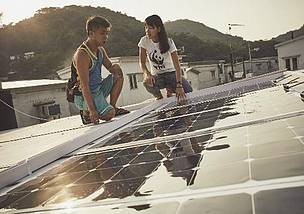 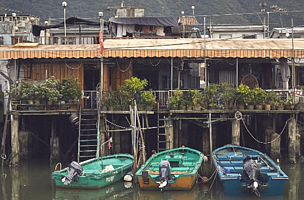 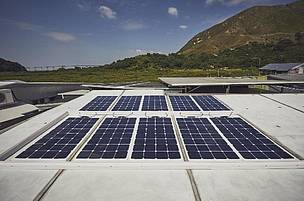