How Can Renewable Energy Thrive in Hong Kong? 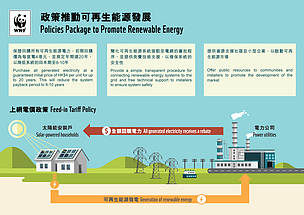 Policies Package to Promote Renewable Energy
© WWF-Hong Kong
A half-day conference on 24 February organized by WWF-Hong Kong, Business Environment Council and Hong Kong Baptist University explored a number of aspects of renewable energy (RE) in Hong Kong – its great potential, the challenges ahead and the policies needed to enable RE to thrive in Hong Kong.

At the conference, Ms Christine Loh Kung-wai, the Under Secretary for the Environment, spoke about how the government is exploring introducing a feed-in tariff and renewable energy certificates to promote RE with Hong Kong’s two power companies. Currently, the government estimates that three to four per cent of the city’s electricity demand could be met by using existing RE technologies for offshore wind, solar PV and energy from biomass and waste. In the 2017 Policy Address, the Chief Executive announced that the government had allocated $200 million for RE projects involving public buildings. Meanwhile, solar PV systems are already being deployed on school buildings and reservoirs, and the government is investigating how its land and buildings could be used to host other RE projects.

Speakers from the two power companies stressed the significant reduction in carbon intensity achieved by Hong Kong’s electricity supply over the past 20 years, made through the development of the Daya Bay nuclear power station and the progressive replacement of coal with gas fired electricity. The speakers also argued that more needs to be done regarding the demand side; but only after more stakeholder dialogue is held. Many questions remain: Are consumers prepared to pay more for renewables?  Will the public support the changes in the landscape of our countryside? One speaker cautioned the audience about the practical difficulties involved in installing and operating large numbers of small PV systems – many locations are often shaded for part of the day, and what may appear to be empty roof space is frequently reserved for other purposes. The intermittent nature of sunshine also makes it harder, though not impossible, to integrate solar power into the power grid.

“We learn from other countries that once the PV industry is mature, the costs of installation plummet and little money is needed to pay for incentives”

WWF-Hong Kong’s presentation at the conference explained the necessity for Hong Kong to “go beyond gas” and swiftly adopt RE if the territory is to play its role in achieving the targets agreed at the 2015 Paris Climate Conference. Assessments undertaken by Hong Kong Polytechnic University suggest that there is more scope for solar PV than is currently being imagined; but these solutions will need a supportive policy environment that facilitates the owners of open land and rooftop space to install solar PV systems.

An assessment of existing policy instruments shows that a feed-in tariff with a high initial rate is needed to kick-start the industry. In other countries, this high initial rate is quickly reduced as the installer industry takes off. WWF-Hong Kong estimates that if the rate for solar PV is initially set at $4/kWh and follows the same cost reduction curve experienced in other countries, this would add less than four per cent to electricity bills and meet six per cent of demand. Such a price rise is far less than the annual fluctuations in fossil fuel costs that the power utilities already experience.

How can the next Chief Executive build on Government’s Climate Action Plan 2030+ and encourage renewable energy uptake?

A Taiwanese expert explained the importance of local government and how the introduction of a feed-in tariff in Taiwan has seen an exponential growth in solar PV on citizens’ rooftops and on agricultural land. This has created jobs and income for both city dwellers and rural people. To stimulate the growth of the renewable energy market, the Taiwan government implemented a feed-in-tariff policy in 2009, and set a concrete renewable energy target: achieving 20GW of electricity powered by local solar energy by 2025. Since then, Taiwan has recorded a significant growth in its solar energy market, particularly in terms of rooftop solar systems, reaching a total installation capacity of 1 GW in 2015.

“But right now, the market does not allow for us to select what kind of energy sources we can use.”
- Workshop participant

Hong Kong Baptist University introduced the results of its deliberations and discussions with the commercial and institutional sectors, the general public and prospective solar PV adopters. The majority of interviewees preferred a feed-in tariff and solar leasing over the other policy options. Solar leasing contracts allow homeowners to rent solar panels from the installer, meaning that rather than paying for panels up front, the homeowners pay a regular fee from their feed-in tariff payment. After taking part in the event, the level of support for RE rose among the participants. However, they did raise concerns about whether some forms of support would result in average households cross-subsiding those well-off enough to have homes with roof space.

The conference participants concluded that there was clearly a political appetite for the development of RE in Hong Kong, and the Scheme of Control could be used to launch an incentive scheme. While there were differing views on the scale of potential for RE in Hong Kong, there was no doubting the high level of enthusiasm: many people want to be involved in generating their own power, so long as they receive a reasonable reward for doing so.

WWF-Hong Kong is pleased to see the government announce an estimate of Hong Kong’s RE potential of three to four per cent by 2030 using already-existing technology. However, if Hong Kong is to help China stay on track with its obligations to the Paris Agreement, the government must commit to reaching these targets.

In the end, the real lesson to be learned from other countries is that while Hong Kong is gathering more data and conducts further studies into RE, we should not delay introducing policies like the feed-in tariff. This tariff should be set at an initially high level, as this will help the supply chain, installers and small investors develop local capacity. Once the industry has become established and the costs are better understood, the tariff can be reduced. Lastly, it is crucial that the power companies and the government work together to develop smart, streamlined regulations that allow small generators to connect to the grid as soon as possible – even before the incentive is introduced.