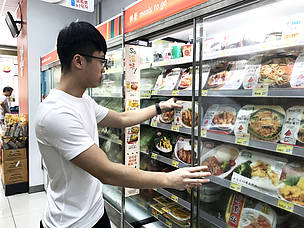 For the guide, WWF and 35 citizen scientists conducted a comprehensive city-wide “Fridge Census”, which covered over 640 stores from 26 grocery retail brands. The results are worrying with only seven out of 26 grocery retail brands passing. This means that every year, more than 90 million kWh of electricity (0.2 per cent of Hong Kong’s electricity demand) is wasted and 51,000 tonnes of carbon is unnecessarily emitted because of missing fridge doors.

During the study, WWF discovered that open display fridges not only have low energy efficiency but high energy demands. In a typical supermarket, the refrigeration system is responsible for 50-64 per cent of total electricity consumption and this percentage can be higher due to the widespread use of commercial fridges with no doors. WWF estimates that two of the city’s grocery retail giants, Wellcome and PARKnSHOP, could save 16,800 and 17,200 tonnes of carbon emissions, respectively, simply by retrofitting doors on their fridges. This equates to savings in operating expenses of $15 million and $17 million, respectively.

“We called for grocery retailers to take immediate action with positive results. A total of nine out of 26 grocery retailers*, representing over 1,200 outlets, have committed to a door-closed policy in the past year two years, which will save an estimated eight million kWh of energy and 5,500 tonnes of carbon annually. Among the retailers which are willing to implement a door-closed policy, the convenience store sector is leading, leaving supermarkets, department stores and frozen food markets behind,” said Olivia To, WWF-Hong Kong’s Assistant Project Manager for Sustainability.

In Hong Kong, the energy efficiency performance of commercial refrigeration is not under any policy regulation by the government. According to figures from the Electrical and Mechanical Services Department, the total energy consumed by refrigeration in 2014 increased by 35 per cent over ten years – the highest rate of increase among all energy end-uses. WWF-Hong Kong urges the government to extend the scope of “Mandatory energy efficiency labelling scheme” by including commercial appliances under the regulation, while high energy consumption appliances such as refrigeration should be put on the top priority.

The guide also identifies the loopholes in storage temperature regulations established by the Food and Environmental Hygiene Department (FEHD) as well as the temperature monitoring measures demonstrated by the retailers. WWF found that open display fridges failed to maintain a proper cooling temperature by keeping perishable products within 4°C or freezing products within -18°C. Over 98 per cent of open display fridges which stored dairy products failed to maintain the standard temperature suggested by the FEHD. To address concerns on food safety, it is critical for the government to enhance and review the legal regulations on storage temperatures. 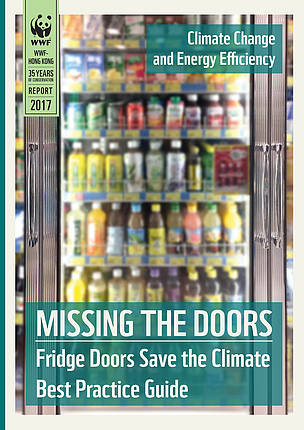 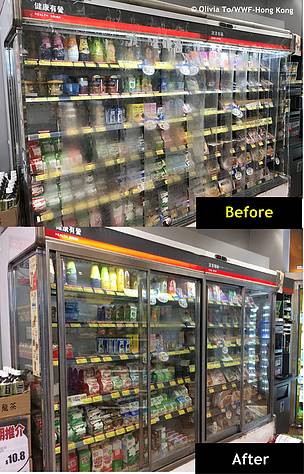 Before and after of retrofitting doors on commercial fridges
© WWF-Hong Kong Enlarge
Like this article?