A Panda in Bonn - Climate leaders converge on Bonn, Germany for COP23 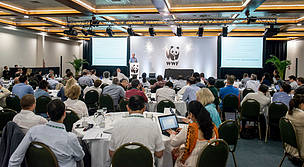 Climate leaders converge on Bonn
© WWF-Hong Kong
Two years after signing the historic Paris Agreement, climate negotiators, NGOs and businesses will meet in Bonn 6-19 November to review the implementation of the Paris Agreement’s goals of limiting temperature rise to less than 2oC. The conference is being chaired by the Prime Minister of Fiji, Frank Bainimarama. Ironically it is being held in Bonn, not in the Pacific, because Fiji is recovering from Cyclone Winstone which, in 2016, wiped out a third of the island’s economy.

The world is not on track to meet the Paris goals. In 2016, global emissions of greenhouse gases were 51.9 billion tonnes of carbon dioxide-equivalent (GtCO2e). According to UNEP’s 2017 gap report, countries’ national commitments (NDCs) only add up to half what is necessary to keep temperature rise to 2oC, and just a quarter of what is needed to keep temperature rise to less than 1.5oC. The UN’s World Meteorological Office announced that in 2016 concentrations of greenhouse gas emissions rose by 3.3 parts per million the fastest growth on record. We need to abruptly switch direction and aggresively cut greenhouse gas emissions.

The impacts on our environment are all too evident. September 2017 was the hottest September on record in Hong Kong. The world has witnessed one after another extreme weather event: the T10 Typhoon Hato in Hong Kong, Hurricanes Harvey in the Gulf of Mexico and Maria in the UK.

Last year delegates were stunned when on 9 November, in the middle of the conference Donald Trump was elected US President. Since then Trump has signaled his intention to withdraw from the Agreement. The US Government will be represented by officials, instead of politicians. But the structure of the Paris Agreement makes it resilient to political upsets. The “Action Agenda” gives important roles to non-state actors like sub-national Government and business. Political change, even in the world’s second largest emitter is not enough to weaken the resolve of the world community. The mantle of leadership is passing from the USA to China. New political figures in Canada and France are already making useful noises. In the USA, the “We are still in” coalition of state and city Government, and business leaders are aggressively affirming the people of the USA’s will to combat climate change.

Bonn won’t be a historic conference. It will be a conference in which nations and other actors knuckle down and ensure “Paris” is successfully implemented. Crucially countries will start to agree the Facilitative Dialogue process. Bonn, and next year’s conference, are the last opportunity to agree rules to revise the NDCs in 2020. These have to be tightened to bridge the gap between what countries have so far offered, and what is needed. The projected emissions gap by 2030 for the 1.5°C target is 16 to 19 GtCO2e.

The planet cannot afford to postpone agreeing the new rules. Already critical ecosystems are suffering irreparable damage. The sustained increase in ocean temperature is already causing widespread bleaching and mortality of the world’s coral reefs; around 50 per cent of the coral on a 700 km stretch of the Great Barrier Reef was killed in the extreme heat of summer 2016-17.

WWF-Hong Kong will be joining other Hong Kong delegates to the conference from Government, business and other NGOs. NGOs are being invited to take on a thought leadership role to help define delegates’ ambitions. WWF is hosting the PandaHub which over the two week period will host around fifty thought provoking, challenging and informative discussions, events, film screenings. This is one of the many positive outcomes of the yearly climate conference – like a Scout jamboree or a business conference, this is a phenomenal opportunity to learn more about the most cutting edge efforts by countries, businesses, NGOs and others to reduce greenhouse gas emissions, and bring those ideas back home. It’s a privilege and an honor to help facilitate this through the PandaHub.

Do please check-in to the Hub for a ring-side seat at the proceedings.