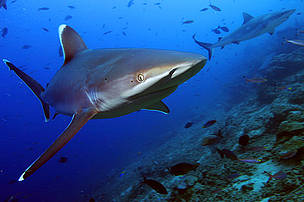 shark
© Brent STIRTON/Getty Images/WWF-UK
Hong Kong: Action taken by global hotel brands to ban shark fin dishes from their offerings over the last five years has gathered tremendous momentum, with over 18,000 international hotels having taken this declining group of species off their menus.

Many observers note that the Hongkong Shanghai Hotels (owner of Peninsula hotels) was an early mover in removing shark fin when it announced that it would stop serving the dish at all its properties from January 2012 onwards. Shangri-La Hotels and Resorts followed shortly afterwards.

A movement that started in Hong Kong but has spread regionally and worldwide has seen hotels announce the removal of shark fin dishes partly as a result of engagement by conservation groups including WWF. Nearly 25 per cent of sharks, rays and chimera are facing extinction, according to a 2014 study led by the IUCN Shark Specialist Group, with overfishing for fins and meat being the major cause.

“Removing sharks from the food chain destabilises marine ecosystems, which in turn has repercussions for people everywhere,” said Andy Cornish, Shark & Ray Initiative Leader, WWF International. “Most international hotel chains outlets have recognised the serious threat that shark-fin consumption poses to the marine ecosystem. But much work still needs to be done. We now call on those in the food-service industry who have not taken such action to get in step with the global movement to respect and preserve our oceans.”

The Hongkong Shanghai Hotels and Shangri-La actions were followed by similar announcements from several international major hotel chains. Hilton, which operates approximately around 4,700 properties, announced its shark-fin ban in 2014, as did Starwood, which operates some 1,300 hotels worldwide. InterContinental Hotels Group has also announced the banning of shark fin dishes at its 5,000-some properties. Other hotel groups with sizeable outlet numbers that ban shark fins include Carlson Rezidor with more than 1,100 hotels and Marriot International with nearly 4,500 outlets. According to WWF calculations, at least 18,200 hotels including a number of individual properties, no longer sell shark fin.

The last five years has been an active time in the shark conservation movement. The landmark Global Priorities for Conserving Sharks and Rays – A 2015-2025 Strategy, was drafted by the Global Shark and Ray Initiative, including WWF and other conservation leaders, which collectively mapped out priorities for halting declines of shark and ray populations.

In October 2016, parties to the Convention on International Trade in Endangered Species of Wild Fauna and Flora (CITES) added 13 species of sharks and rays to Appendix II, bringing the total that cannot be traded internationally unless harvested sustainably to 20. However, shark fin dishes remain a popular wedding dish in East and South-East Asia, and most fisheries that take sharks remain poorly managed.

Tens of millions of sharks and related species are caught annually. This includes around 10 million blue sharks taken for their fins, and increasingly meat. Indonesia, India and Pakistan land around 25 per cent of the global catch of sharks, rays and chimera. Hong Kong handles between 50% and 80% of the global trade in shark fins, bringing in catches from more than 100 countries, with Spain its biggest supplier.

“It’s about encouraging a responsible approach to the environment,” said Dr. Cornish. “Every restaurant and hotel which recognises that many species of sharks are in dire straits, and that a responsible menu does not offer shark fin, sends a message to others in the industry who have not yet taken action.”

1 Accor is in the process of phasing shark fin out of all its Asia-Pacific properties by 2020. They have previously announced that 93% of these properties have already banned shark fin.