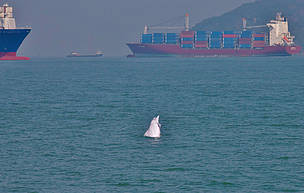 © Grant Abel
The dangers posed to the Chinese white dolphin from heavy marine traffic in South Lantau waters was examined by WWF-Hong Kong, with the results of an underwater sound study conducted between October 2016 and September 2017. A total of seven underwater sound recorders collected the whistles and echolocation clicks of the Chinese white dolphin and finless porpoise, as well as the noise generated by vessels passing through the area.

The survey provides insight into the movements and feeding patterns of these mammals, giving the first full picture of how they use the busy shipping channels during the day and night.

“Previous research suggests that there is a link between Chinese white dolphins and fish regarding habitat usage. Fast moving boats and ferries can inhibit their ability to locate food and increase stress levels,” said Dr Matthew Pine, a marine scientist and underwater noise specialist. “Ship strikes are a great risk for the mammals since we see them travelling across the ferry channel to forage around the Soko Islands, including at night when there’s no chance of ferries seeing them. Chronic exposure to high noise levels from vessels can cause desensitisation to vessel presence and inhibit communication between the animals, which may be a factor in a potential strike.”

The period from 6a.m.-6p.m. recorded the highest amount of activity around the coast of Fan Lau, with fewer dolphins detected between 3a.m.-7a.m., suggesting that they might take advantage of the reduction in marine traffic to cross the fairway to the waters near the Soko Islands. The Soko Islands are a key foraging habitat for the dolphins and porpoises, according to findings of the study.

Rerouting ferries away from the dolphin habitat, and setting up a speed restriction zone in the South Lantau waters, are two potential measures WWF has been exploring. “WWF strongly encourages government departments, the maritime sector, academics and NGOs to maintain open and continuous dialogue to explore and implement measures to lower impacts from marine traffic and to safeguard remaining core habitats,” said Samantha Lee, WWF-Hong Kong’s Conservation Manager for Oceans.

“Effective management of the proposed Southwest Lantau Marine Park and South Lantau Marine Park is essential for the survival of local marine mammals, where fishing activities are regulated and vessel speed restricted. The Agriculture, Fisheries and Conservation Department must develop a holistic fisheries management and enforcement plan to facilitate the recovery of fisheries resources for the dolphins to prey on inside the marine park. With more to eat and a haven away from high-speed vessels, the Chinese white dolphin population can begin to recover,” Samantha added.

WWF is holding a free public seminar tomorrow (Saturday, 9 December) to discuss these issues and raise awareness of the threats faced by the Chinese white dolphin. Panellists include WWF’s ocean conservationists and overseas experts. For details and enrolment, please visit http://bit.ly/CWDmarineforum-e.