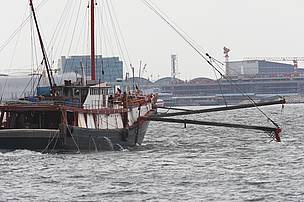 Fishing Boat near Chek Lap Kok
© Adam Minu
Once considered an impossible goal, a ban on trawling in Hong Kong has been implemented. After over six years of tireless campaigning by WWF-Hong Kong, on 18 May 2011, the Hong Kong Legislative Council passed legislation for the ban of all trawling in its entire local waters . The ban will bring an end to all bottom and mid-water trawling activities, including fishing using pair, stern, shrimp and hang trawlers. Proposals for the ban were previously announced by Hong Kong’s Chief Executive Donald Tsang in his October 2010 policy address.

The new legislation, which comes into full effect on 31 December 2012, includes a proposed HK$1.72 billion (US$219 million) trawler buyout scheme that provides ex gratia payments for affected inshore trawler owners and larger vessels that generally do not operate in Hong Kong waters. The new rules also include a payment for owners who voluntarily surrender their vessels as well as a one-off grant to affected local deckhands.

The trawling ban marks a crucial moment in the history of Hong Kong’s marine conservation. It is also a testimony to WWF-Hong Kong’s unremitting effort in the preservation of the city’s near-collapsed marine ecology. WWF-Hong Kong applauds the ban and sees it as a bold and encouraging step, making the SAR a role model for the region to eradicate such destructive fishing practices and to pave the way for the development of sustainable fisheries in Asia and further afield.

For more than six years, WWF-Hong Kong’s SOS “Save Our Seas” campaign has been advocating the protection of local marine biodiversity, the restoration of Hong Kong’s fisheries and the creation of new sustainable employment for fishermen. Trawling is among one of the many marine conservation issues SOS has tackled. With the trawl ban successfully in place, the next step for WWF is help address alternative livelihood issues for fishermen. WWF will also lobby the government to introduce more marine conservation measures in order to help develop a sustainable fisheries management in the territory.

Our victory over the highly destructive practice of trawling, though pivotal, is only the beginning of the quest for sustainable fisheries and a truly healthy marine ecology.

* The bill was automatically passed via the negative vetting process, in the absence of amendments or objections from legislators to the government’s proposed amendment bill by 11 May.