Freshwater getting scarcer with diminishing wetlands 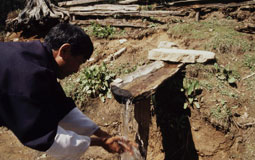 Roel A. BURGLER
© WWF
More than one billion people lack access to freshwater and more than two billion people lack adequate sanitation services. Wetlands and rivers are the source of water, a source of life, and they are running out fast. In some developing countries – worst hit by the water crisis – the loss of wetlands forces people to walk greater distances to fetch water for cooking and basic everyday care.

"With already half the world’s wetlands gone, we need a new mindset that appreciates wetlands as water’s source and storage instead of land to be drained and developed,” said Jamie Pittock, Director of WWF’s Freshwater Programme. It doesn’t matter how many dams you build to provide energy, food and water – without properly functioning lakes and rivers, there will be not be enough water.”

About two billion people are already experiencing water shortages. According to The Millennium Ecosystem Assessment Synthesis Report, wild caught fisheries and freshwater are exploited well beyond sustainable levels and this does not factor in future, growing demand. Water removal for human use means that several major rivers, including the Nile, Yellow, and Colorado Rivers, do not always flow to the sea.

On this World Wetlands Day, WWF urges governments and communities engaged in land and water resource management to think twice before draining wetlands. WWF reminds leaders of the added impact of climate change which is already intensifying droughts and floods. For example, a recent WWF report shows that freshwater fish are under particular threat without enough oxygen to breathe as waters grow warmer. The link is perhaps nowhere more evident than in mountains such as the Alps and Himalayas where glacier meltdown affects the reliability of water flowing to towns and farms downstream.

In Hong Kong, the Deep Bay wetlands support the livelihood of a range of people. These include the farmers with oyster beds along the coast of Outer Deep Bay from Lau Fau Shan down to Pak Nai, and the fishermen who catch fish in Deep Bay. Maintaining a good quality of water in Deep Bay and the water that drains into it, is vital to the livelihood of these people.

In addition, WWF is also working closely with the pond-fish farmers along the coast of Deep Bay under the ‘Adopt A Green Fish Farm Project’, to maintain the livelihood of these fishermen and the future of their ponds which contribute to the ecological value of the Mai Po Inner Deep Bay Ramsar Site.
“Wetlands’ values need also to be seen in economic terms because once lost, the billions of dollars in material and services provided by these freshwater systems are almost never recoverable,” said Jamie Pittock. 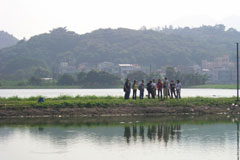