Being much loved is no guarantee against extinction in Hong Kong. In a public poll organised by WWF, Hong Kong people actively voted for 10 selected local marine species – "Ocean's 10" – over a four-month period. Mirroring its usual popularity, the famous Chinese white dolphin snapped up the highest votes in all polling categories, followed by the threatened Green turtle and Horseshoe crab. WWF also today released an "Ocean's 10 Species Status Report" revealing that some of these local species are struggling to survive, and calling for immediate actions to protect them.

Under three separate polls, namely "My Favourite Ocean's 10", "Ocean's 10 Most Wanted" and "The Most Energetic Ocean's 10" conducted between June and October this year online and through other exhibition and outreach programme channels, a total of 6,841 people cast their votes.

More than half of the voters chose the Chinese white dolphin as their favourite. The Green turtle was ranked the second in both "My Favourite Ocean's 10" and "Ocean's 10 Most Wanted", followed by Horseshoe Crab and Brain Coral in the two respective categories. Mudskipper, a star species at WWF's Mai Po Nature Reserve, surpassed Green Turtle as the second "Most Energetic" species.

Sadly however, the dire situation facing the globally Critically Endangered Chinese Bahaba and locally depleted Hong Kong Grouper, both well-known edible fish in Hong Kong, were largely unknown to the general public. Mr Alex Fong, Ocean's 10 Ambassador of WWF Hong Kong said, "The polling results show charismatic marine species such as the Chinese white dolphin and Green turtle have received far greater public attention than commercially important fishes. We also need to pay attention to fishes as some of them are under great threat too."

WWF's Species Status Report found the three species in dire need of attention if they are not to go extinct in Hong Kong waters: the Green turtle, Chinese Bahaba, and Horseshoe crab. The Report, which reviewed data across the past three years since "Ocean's 10" was launched, reveals for instance that Green turtles have not come back to the only known regularly used nesting beach at Sham Wan on Lamma Island for four consecutive years. This indicates that the current generation nesting there are close to the end. Despite rare nestings that have occurred in the past two years at other beaches, these last survivors are unlikely to be able to maintain a stable population in Hong Kong.

"These Ancient Mariners are in desperate straits in Hong Kong. There's a good chance we're watching them going extinct right in front of our eyes, which would be such a sad moment for Hong Kong. It may not be too late but we've got to see urgent and major conservation efforts in the next few years" noted Dr. Andy Cornish, Conservation Director, of WWF Hong Kong.

The Chinese Bahaba, albeit its low popularity in the WWF poll, is actually a species of prime concern. This large croaker, which can reach up to two metres in length, and only occurs in South China, saw a massive decrease in catches from 50 tonnes in the 1930s to 2.5 tonnes in 2000. It was identified as a globally Critically Endangered species in 2006 and is close to extinction.

Although the size of the Pearl River Estuary Chinese White dolphin population has remained relatively stable at a minimum of 1300 individuals in the last 10 years, there is little being done to address the high mortality rate of young dolphins. Without a large and healthy younger generation, the long-term survival of the population is in doubt. The dolphin population is already under considerable stress from habitat loss and degradation, pollution, reduction in food availability, and increases in vessel traffic, and new developments such as the proposed LNG terminal at Sokos, HK-Macau-Zhuhai bridge and Container Terminal 10 will worsen the situation.

"The results from our review of the "Ocean's 10" species" are truly shocking. Major species are disappearing right here, right now while the government twiddles its thumbs and dabbles in half-baked conservation measures. It isn't too late for most species, but without a serious change in attitude from high levels of government, species like the Green turtle and Chinese Bahaba are going to become just a footnote in a history book" said Dr. Andy Cornish.

WWF calls on the Environment Bureau to formulate comprehensive and detailed Species Action Plans for the Green turtle, Horseshoe Crab and Chinese Bahaba. In addition, all existing marine parks should be designated as "no-take" zones so that marine life can recover from fishing pressure and other human disturbance. Outside the marine parks and as advocated by WWF's Save Our Seas (SOS) campaign, sustainable fisheries management is urgently needed to relieve local marine life from intensive harvesting.

"We were encouraged by the good public response of the Ocean's 10 polling. We particularly thank Solomon Systech for the kind support of the Ocean's 10 programme, which has enabled WWF to spread key marine conservation messages to the general public for the past three years. Hong Kong has a wonderfully rich marine biodiversity including 84 species of coral, almost 1,000 marine fishes and three out of four of the world's existing Horseshoe crabs. We can all play a part in protecting the amazing marine life in our sea," said Mr. Patrick Ho, WWF Hong Kong Senior Education Officer. 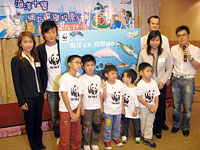