Latest research findings from a coral fish monitoring project by Dr Andy Cornish, Conservation Director of WWF Hong Kong, indicate that fish populations on coral communities in the Hoi Ha Wan Marine Park in Sai Kung have failed to increase from already low levels since the park was established there in 1996. Furthermore, a similar picture has emerged at the Tung Ping Chau Marine Park (Mirs Bay), established in 2000.

"The fact that commercial fishing using hook and line, fish traps and gill nets still legally occurs in Hong Kong’s Marine Parks by fishers issued with permits from the Agriculture, Fisheries and Conservation Department is the most likely reason for fish biomass remaining low in these marine parks," explained Dr Cornish.

The main reason for the low biomass is a lack of large fish, with overfishing the most likely reason. Interviews with people who have been diving in Hong Kong for decades show that large reef fish used to be found on these shallow coral communities but they are seldom found now. Even though the number of fishermen with permits has declined since the Hoi Ha Wan Marine Park was established, there are still 269 of them and each can do unlimited amounts of fishing with their permitted type of fishing gear so it is unlikely that the levels of fishing are much less inside the park than outside.

"Marine Parks are partly intended for recreation but they are also supposed to protect the marine life within them. Agriculture, Fisheries and Conservation Department must rethink their management strategy. After 10 years of so-called protection, it’s time to say this experiment has failed and that commercial fishing should be banned in the marine parks.

Fish populations on coral communities at the Hoi Ha Wan and Tung Ping Chau Marine Parks, and Sharp Island (in Port Shelter) were studied over the same time period. Tung Ping Chau Marine Park differs from Hoi Ha Wan as it has two small core areas within the park where all fishing is banned. The core areas are designed to prevent damage to the richest coral areas by fishing or anchor damage

Marine reserves, where no-fishing is allowed, have been shown to allow fish populations to recover from overfishing in many countries, but those on coral communities in Tung Ping Chau have shown no change in diversity, abundance or biomass since the park was established. "In heavily fished areas like Hong Kong you would expect to see some recovery of the fish populations around five years after fishing is banned, and it is highly likely that the two core areas which are just a few hundred metres in length are far too small to benefit larger fishes like parrotfishes which may roam over considerable areas," Dr. Cornish said. "What is particularly revealing is that coral fish populations at Sharp Island (Kiu Tsui), which is not a marine park and has no restrictions on fishing, have showed very similar trends to those within the two marine parks studied."

Coral communities support certain fishes found nowhere else, particularly species of butterflyfish that feed on live coral, and are nursery grounds for some important commercial species. "Fishes are probably the most overexploited marine resource in Hong Kong and much more needs to be done to conserve them" said Dr Cornish. "It is reckless not to ban fishing in marine parks when fish stocks and the marine ecosystem in Hong Kong have been shown to be close to complete collapse. Marine parks could act as insurance against collapse in other areas if fishing was banned and the parks were effective refuges, and allowing juvenile fishes to mature and reproduce before they were caught. These should benefit fishermen in the long-term and besides, they have little to lose by not continuing to fish the coral communities now as there are so few large fishes remaining on them."

"The results from this study strongly support one of the primary objectives of WWF's SOS "Save Our Seas" campaign, to create 10% of Hong Kong waters as no-take zones, including all marine parks," concluded Dr Cornish. 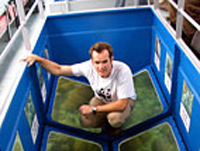