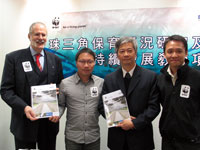 25 Jan 2007
© WWF HK
A new WWF report has found that freshwater biodiversity of the Pearl River Delta faces of barrage of threats, but that surprisingly little information is available on the current health of freshwater habitats and species. WWF built a conceptual model for the nine Municipals in the PRD to reveal the complexity of threats facing the freshwater biodiversity of Pearl River Delta after compiling more than 1,600 English and Chinese literature into a bibliographic database and conducting a number of fieldtrips and meetings.


The report of a scoping study under the Epson Pearl River Delta Programme, initiated by WWF in July 2005, was generously supported by Epson Foundation. The purpose of the study was to better understand the complex linkages among the various threats to biodiversity, and their causes in order to identify opportunities and strategies for reducing threats through future conservation actions in the region.

"Epson Foundation is honored to be the title sponsor of the Epson Pearl River Delta Programme since 2005. With the vision of Co-existence with Nature, we have the pleasure to build up a long-term relationship with WWF," says Mr Willie Wong, Deputy General Secretary of Epson Foundation, "In fact, lending support to environmental education is one of our company’s objectives in realizing the corporate social responsibility to the society".

"The threats facing the freshwater biodiversity of the PRD are many and severe, and the linkages among them are complex," explained Dr Alan Leung, Senior Conservation Officer, WWF Hong Kong, "The major direct threats identified to freshwater biodiversity flow alterations, habitat change and degradation and pollution. Other threats endangering biodiversity include over-exploitation of natural resources (e.g. through fishing), human intrusion and disturbance to ecologically sensitive habitats and invasive species. Climate change and extreme weather events, which have emerged as significant threats in recent years, compound the stress already experienced by freshwater ecosystems in the PRD."

More work is needed to fill-in the significant gaps remaining of our knowledge on the current status of freshwater biodiversity and management. "WWF is planning to facilitate data-sharing workshops or forums as an effective platform among experts and officials to gather and collate the most current information on freshwater biodiversity. At the same time, we will explore the feasibility of delivering best-practice solutions to the region, such as using environmental friendly approaches to reduce flood risk, which WWF has developed with Government in Hong Kong," said Mr Eric Bohm, CEO, WWF Hong Kong.

Unlike the shortages of sufficient clean water which have received considerable publicity, the threats facing freshwater biodiversity in the PRD have a lower public profile. Anthropological impacts are not only causing a loss in biodiversity, but are also disrupting the ecological functions of the freshwater ecosystems. For instance, some 381 species of freshwater fish has been recorded in the Pearl River according to a study in 1989, however, according to the figures from the mainland authority in 2005, 92 species faced extinction.

Getting the message across is crucial for conservation. WWF is hiring a professional polling company, TNS, to conduct a poll on public perceptions to freshwater problems of the Pearl River in Guangzhou in mid-2007 to facilitate the development of communication strategies for the region.

"WWF believes education is the long-term solution to conservation. By applying "multiplier mechanism", WWF is dedicated to build up teacher’s knowledge and capacity to design and implement Education for Sustainable Development (ESD) programmes for our next generations" said Mr. Alex Wong, Senior Education Officer, WWF Hong Kong. In this project, WWF partnered with 18 Shenzhen primary and secondary schools to conduct two teacher workshops in 2006. With the support from WWF, the teachers successfully organized different school-based ESD programmes for over 3000 students in Shenzhen last year.

Though many species are facing extinction at the PRD, the 2003 rediscovery of an endemic fish - White cloud mountain minnow after its disappearance for 20 years by the mainland researchers suggested that areas of conservation importance remain to be discovered and protected in the PRD.

"Since the problems of the freshwater biodiversity facing the PRD have complex linkages, WWF believes that ultimately an integrated approach is required to address the needs of freshwater for humans as well as various components in the freshwater ecosystems, including the fauna and flora in the headwater and the Chinese white dolphins in the estuaries," concluded Mr Bohm.