Black Point is a viable option for CLP's LNG terminal 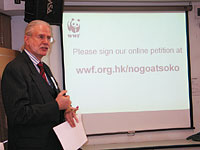 9 Jan 2007
© WWF HK
After reviewing the major components of the Environmental Impact Assessment (EIA) for Black Point as a potential site for the liquefied natural gas (LNG) terminal for Hong Kong, WWF considers that CLP has not provided a balanced comparison for the two potential sites: Black Point and South Soko Island (Soko). Although CLP stated its preference on Soko months before the EIA was released, the EIA shows that Black Point is a viable option, and WWF believes, is a better option than the EIA suggests.

Some of the major reasons stated by CLP for preferring Soko is that area of reclamation is smaller, project lead time is faster, and the potential hazard of the marine transit of the LNG carrier is less. However, WWF considers that some of the information given in the EIA for Black Point in relation to these points is misleading.

The EIA report estimates that 16 ha of marine habitat will need to be reclaimed in order to locate the LNG terminal at Black Point, as compared to 1.7 ha at Soko. While both reclamations are relatively small WWF is dubious as to whether the proposed reclamation area for Black Point needs to be as large as suggested. About half of the proposed reclaimed land in Black Point appears unnecessary, or its purposes is unexplained. For instance, the purpose for the 2 ha laydown area is vague while there seems to have been little attempt to integrate the terminal facilities, such as administrative buildings or other supporting facilities, with existing power station, all of which are owned by the same company.

Given that the Black Point reclamation is small, and could probably be reduced, WWF questions whether the completion time for building the LNG terminal adjacent to the Black Point gas-fired power station would really be significantly slower than building the terminal at a remote island site with no road access, in addition to a 38 km pipeline. If the completion time is actually similar, the short-term advantage of building the LNG terminal at Soko is greatly diminished. Also the Government could facilitate the approval process at Black Point as Black Point is already an industrial area, , while the Soko site lies in the proposed Soko Islands Marine Park, an area with high conservation value.

In the EIA, only one marine access route for the LNG carrier to Black Point is considered viable, from the East Lamma Channel, and transiting through the Ma Wan Channel, Urmston Road before berthing at Black Point. Passing to the east of Lantau is preferred due to the naturally shallow waters to the west of Lantau, which would prevent an LNG carrier passing to the Black Point site from this direction. In the hazard to life assessment for the Ma Wan Channel route, the EIA concludes that the risk of transit is acceptable according to the Government guideline. While the risk assessment is technical and the public perception to the risk is complicated, the EIA report takes no account of the fact that the western approach option may well become possible.

According to mainland media reports, the Shenzhen Government announced and started dredging for, the Tonggu Channel running from the west of Lantau to Shekou in 2005. This channel runs roughly south to north just outside Hong Kong waters, with an expected completion date around mid 2007.
Without this route being included in the EIA, the picture outlined in the EIA comparing Black Point and Soko is obscured.

WWF has already expressed numerous concerns about CLP's desire to create an industrial facility in the Sokos. WWF believes that the Black Point is a viable option from an environmental point of view and worthy of much stronger consideration.

WWF has launched an on-line petition (wwf.org.hk/nogoatsoko) to encourage the public to express their concerns on CLP's preference for an LNG terminal at the Soko Islands to The Director of Environmental Protection Department during the public consultation which ends on 25 Jan 2007. A WWF advertisement illustrating the potential threats to Chinese white dolphins with an explanatory copy will be displayed in newspapers to rally for public support.