"Lucky" bird of prey released back into the wild 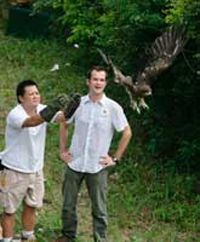 One seriously fortunate raptor will be soaring again today after a joint rescue effort by WWF and Kadoorie Farm and Botanic Garden. In May, the injured Black eared Kite was found floundering in Aberdeen Harbour, with petroleum covering his feathers. He fully recovered after receiving intensive treatment at Kadoorie Farm & Botanic Garden's Wild Animal Rescue Centre (KFBG WARC) for 2 months and will be released to the wild.

On 16 May, Dr. Andy Cornish, WWF Hong Kong's Director - Conservation, spotted a strange shape in the water in amongst the grubby boatyards of Aberdeen harbour. "I saw a shape in the water under a platform that looked vaguely animal-like, although I suspected it was probably just a plastic bag. After a minute or so, and to my complete surprise, it moved and I realized it was Black eared Kite. It made some pathetic attempts to swim using its wings and was clearly at the end of its limits. I managed to scoop the bird towards me with a paddle and lifted it out of the water, it was completely limp and near death. I phoned KFBG who advised me to take it to the nearest SPCA branch where it could receive immediate care and be transferred to KFBG. " Dr. Cornish recalled. It is unclear how the bird ended up in Aberdeen Harbour.

The bird was then sent to KFBG WARC for further inspection. With assistance from Professor Paul Lam's team at City University, it was discovered that the oily coating on his feathers was petroleum based. Contamination was picked up from the polluted waters of Aberdeen Harbour. The bird also suffered trauma to its left wing. The male bird was deeply saturated by the contaminant, and had lost all natural waterproofing qualities, preventing him from taking to flight. A thorough investigation of the bird by Dr. Alex Grioni, KFBG veterinarian, also discovered a lead bullet imbedded in the humerus bone, close to an old fracture in the right wing, indicating that he also survived being shot in the past!

He received fluid therapy to combat any dehydration problems after arrival and was then housed in the veterinary hospital under observation. Two days later, he was washed with a detergent agent to remove excess contaminate. During the last 2 months of rehabilitation, this lucky bird recovered well and regained its natural waterproofing. It received a varied diet of chicken, mice and fish and gained weight. After the initial treatment, he was relocated to the KFBG WARC Large Bird Quarantine Enclosures so that he could exercise and fly freely to build up strength. Now he is ready to go back to the wild and join his folks.

Dr. Cornish is delighted about the release saying, "This is one seriously lucky bird, having survived, several life-threatening situations. It needed some help this time but thanks to the great work of KFBG's Animal Rescue Centre, the kite will soon be soaring high in the sky again."

Black eared Kites are the most common raptor in Hong Kong, being well adapted to living in and around urban environments. To tourist at our harbour front they are another feature of our skyline! Within the SAR, the Black eared Kite is a very widespread species. They feed on dead fish, offal and snakes, winged termites, frogs and small birds. Their broad diet and scavenging habits are likely the main reasons why they thrive in and around our city!