WWF launched the "A Quick Guide for Appreciating Birds" CD today at the Assembly Hall of Hong Kong Society of the Blind. Thirty visually impaired joined the launching ceremony and tried the CD which records the calls of 20 common wild bird species found in Hong Kong.

Hong Kong is home to over 420 species of birds - roughly a third of the total number of bird species in the whole of China - in spite of its small total area. The aim of producing this CD is to provide an opportunity for the visually impaired to appreciate the wonders of birds by hearing the birds’ twitters. Besides the birdcalls, introduction of each bird species on their appearance, feeding habit and breeding behavior will also included in the CD.

One thousand complimentary copies will be distributed to public libraries, schools and rehabilitation centres which provide services for visually impaired people. WWF is also going to run a series of nature appreciation programmes for the blind at the Mai Po Nature Reserve in coming autumn.

Since our inception in 1981, WWF in Hong Kong has worked to ensure a better environment for our present and future generations in Hong Kong through the implementation of our focussed conservation and education programmes . WWF has been assisted in managing the Mai Po Nature Reserve since 1984. WWF organises different types of visiting programmes to raise visitors’ awareness of the importance of wetland conservation. 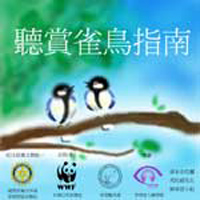