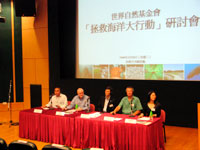 28 March 2006
© WWF HK
STUDY WILL LOOK AT THE ECONOMIC AND SOCIAL BENEFITS RESULTING FROM A RICH MARINE ENVIRONMENT, RESTORED THROUGH THE CREATION OF NO-TAKE ZONES, PROVIDING THE FOUNDATION OF AN INDUSTRY AND ECONOMY BASED ON ECO-TOURISM (28 March 2006)

HONG KONG, 28 th March 2006 – The Chairman of WWF Hong Kong, Mr Markus Shaw today announced, that as part of its SOS (Save Our Seas) campaign, the conservation organization is to fund a socio-economic study of the north eastern waters of Hong Kong.

Speaking at a seminar on No-Take Zones (NTZs), for local fisherman, Mr Shaw said, the aim of the study is to look at the affect the establishment of NTZs in Tolo Harbour, Port Shelter and all marine parks would have on fish stocks and the eco-tourism opportunities and benefits that would arise as a result.

“In other words, we want to show the fisherman and the communities of Sai Kung and Tai Po that an economy based on eco-tourism, built on a foundation of NTZs full of fish, would be much more valuable than the current economic model based on a declining fishery.

“We want by this study to convince the government to invest the amounts of money necessary to make this possible – to create and enforce NTZs, to compensate fishermen for loss of fishing grounds, and to retrain fishermen who might want to engage in a different activity,” he said.

Mr Shaw said that while the WWF supported government’s amendments to the Fisheries Protection Ordinance, their measures did not go far enough.

He called on fisherman to support WWF’s proposal, join hands with WWF, and give government a “wake up” call before it was too late.

“We need your support to make this Government deal with the issue of compensation and investment now, because the Government’s tactic seems to be to let your industry collapse, so that they don’t have to spend any money. In the meantime not only your industry and livelihood will collapse, but the marine ecosystem will be damaged beyond repair and lost to all future generations of Hong Kong people.

“We are not going to let this happen. We are asking the Government for investment, not neglect: to save fish and to save fishermen. Our proposals are a better deal for fishermen than the Government’s: we are taking a leadership position and making proposals which will make a difference, not putting off till tomorrow difficult decisions that have to be made today,” he said.

“The Government is committing $5.5 billion to the redevelopment of Ocean Park: this is a theme park which showcases marine life. They will be bringing in polar bears and killer whales from far away. But for a fraction of this amount, the Government can restore the fisheries, compensate the fishing industry and create a real underwater paradise on our doorstep rivaling Thailand and the Philippines, which will create employment for thousands of people,” he concluded.

Dr Phil Cadwallader, the Director of the Fisheries Issue Group of the Great Barrier Reef Marine Park Authority speaking at the seminar said, “It was the aim of the Authority during the recent rezoning of the Marine Park to ensure at least 20% of all broad habitat types are protected in no take zones.”

“ This ratio will guarantee maintenance of natural processes, ensuring the survival of fish stocks.”

“ Effective marine protected areas and good fishing management ensures fish for our grandchildren’s grandchildren and beyond,” he said.

He also highlighted the damage caused by bottom trawling.

A fishermen from New Zealand, Geordie Murman, speaking at the seminar, said the New Zealand quota system ensured a sustainable fishery, and that the no-take zone system is providing benefits for fishermen as fish in the zone spill out and increase catch sizes outside the zones.

He did however call on Hong Kong fishermen to ensure they became engaged and represented throughout the process of any new legislative initiative aimed at bringing about change in their community.

“Our experience is that no-take zones have enhanced production of offspring which can restock fishing grounds, leading to enhanced catches outside the no-take zones. Also the creation of no-take zones has united the community and reduced overall illegal fishing in municipal waters.”

Various academic institutions and environmental consultancies are now being asked to tender to undertake the study.

It is hoped it will be completed by August this year, in order to assist government in its deliberations concerning amendments to the Fisheries Protection Ordinance. 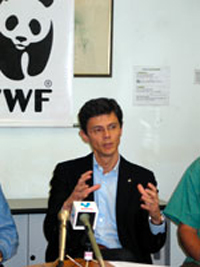