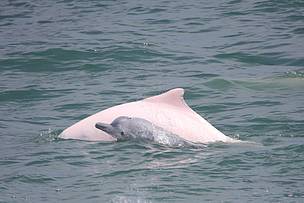 Chinese White Dolphin Numbers Hit Record Low
© Aupres Project
A government report has revealed that the number of Chinese White Dolphins (CWDs) in Hong Kong waters has hit a record low of 47. The downward trend further raises the alarm on the future survival of the remaining dolphins. The latest annual dolphin monitoring report published by the Agriculture, Fisheries and Conservation Department (AFCD) indicates 47 dolphins remained in Lantau waters, with their highest occurrence recorded in West Lantau and Southwest Lantau between April 2016 and March 2017, a drop of 27 per cent compared to last year’s data that reported 65 dolphins.

WWF-Hong Kong believes that habitat destruction from expanding reclamation work in Lantau waters and the hi-speed marine traffic in the area has increased stress on the dolphin population. WWF is currently conducting studies to investigate the potential impact from marine traffic, in particular of high speed vessels, on a species that is struggling to survive.

“Reclamation destroys dolphin foraging habitat and marine traffic increases the collision risk. Also, the underwater noise generated inhibits their echolocation capability. These disturbances threaten the survival of the remaining dolphins in Hong Kong waters. A comprehensive survey in the Pearl River Estuary is urgently needed to get a better understanding of how the entire dolphin population is doing. We hope that more resources can be given to AFCD on future CWD conservation work.” Samantha Lee, WWF-Hong Kong’s Conservation Manager for Oceans said. WWF-Hong Kong also urges the government to designate the West Lantau Marine Park to protect the remaining dolphin habitats.

WWF is also concerned the survey showed only 17 young calves were sighted over the last year, which represents only 1.4 per cent of the total sighted dolphin number. In 2003 calf sightings represented close to 8 per cent. This decline in numbers could lead to inbreeding and fragmented family groups. An investigation of adult survival probability, birth demographics and population viability analysis should be conducted immediately.

To measure the exact impact from marine traffic, WWF is now undertaking acoustic studies to investigate the presence and migration patterns of CWD in Lantau waters. A noise density map and collision risk model is to be produced.

“The AFCD has been conducting its CWD monitoring programme in the last 20 years and WWF-Hong Kong has commenced our acoustic study work. We need a more indepth population survey across the Greater Bay area and Guangdong so that a co-ordinated habitat conservation plan with marine protected areas can be realized.” Peter Cornthwaite, CEO, WWF-Hong Kong added.

The Government’s Biodiversity Strategy and Action Plan commits it to develop a Species Action Plan for the CWD in the next four years, so we need a joint effort from government, WWF and marine specialists to implement effective conservation measures and reduce the threats to the CWD.