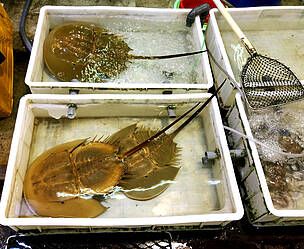 The Horseshoe crab was identified as a priority species requiring implementation of “Conservation Action Plans” in the “Hong Kong Biodiversity Strategy and Action Plan 2016-2021”. To understand consumers’ views on sales of this species of conservation concern in the market, WWF-Hong Kong commissioned the Hong Kong Public Opinion Research Institute (HKPORI) to conduct a survey to understand the general public’s knowledge of horseshoe crabs and their views on the conservation policies of the species.

Lydia Pang, Project Manager, Oceans Conservation at WWF-Hong Kong remarks “Public opinion research showed that the general public was willing to move forward to support conservation of adult horseshoe crabs. Some seafood restaurants might sell or display uncommon species to draw consumers’ attention, but close to 60% of the general public claimed that restaurants selling or displaying species of conservation concern such as horseshoe crabs would decrease their intention to choose those restaurants. In addition, over half of the public (52%) said that they would favour seafood restaurants or stalls that opt for ocean-friendly practice. This means ocean-friendly seafood business will be more appealing to customers.”

WWF-Hong Kong believes that the seafood business has a major role to play in supporting marine conservation, because they can help to improve fishing operations and consumer behaviour. WWF-Hong Kong has initiated a “Horseshoe Crab Counts” campaign, encouraging the seafood business to pledge not to sell or display horseshoe crabs. A key visual sticker of the campaign will be displayed at the pledged venues for easy identification by customers and to enhance public understanding. To date, a total of 26 stores in Sai Kung Seafood Street, Lei Yue Mun Seafood Street, Sam Shing in Tuen Mun, Cheung Chau and North Point Pier have taken pledge. WWF-Hong Kong is calling on more stores to support the campaign.

Professor Laurence McCook, Head of Oceans Conservation at WWF-Hong Kong says “Given their serious situation globally, WWF is asking people to consider horseshoe crabs as ocean treasures and not as food. We hope the whole seafood supply chain, from consumers, seafood markets and fishermen, will work together to curtail the consumption of these prehistoric marvels.” 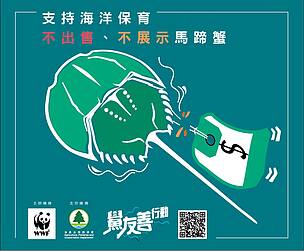