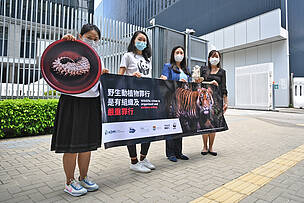 Jovy Chan, Manager, Wildlife Conservation, WWF-Hong Kong, pointed out “The volume of illegal wildlife trade in Hong Kong remains high. However, internationally significant cases have not been pursued by Hong Kong prosecutors owing to the insufficiency of evidence. This legislative amendment confers the power of investigation and enforcement on local enforcement authorities, allowing them to inspect the financial flow associated with this illegal trade, of individuals and companies and confiscate their proceeds of crime. Besides, the amendment to the legislation is beneficial to collecting evidence for prosecutions in a bid to enhance the deterrent effect for the effective tackle of smuggling activities.”

Hong Kong’s record pangolin seizure of 8.3 tonnes seized, along with 2.1 tonnes of ivory in 2019 remains unprosecuted because of the lack of evidence. Within the 3 years between 2018 and 2020, local enforcement authorities seized over 929 tonnes of wildlife valued at over HK$358 million. “Hong Kong is a major transit hub for the illegal wildlife trade. Traffickers exploit the Hong Kong Ports for continuous trade of the world’s most endangered species of wild fauna and flora. The volume of trade is on the rise, contributing to the global extinction crisis.”, added Jovy Chan.

WWF’s 2020 Living Planet Report reveals two-thirds decline in wildlife populations on average since 1970, with the illegal wildlife trade being a major threat. Hong Kong is obligated under the Convention on Biological Diversity to conserve biodiversity and utilise resources sustainably. Brian Gonzales, Head of Protection of Endangered Species, WWF-Hong Kong, indicates “The illegal wildlife trade is recognised as a key driver of the continued degradation of marine and terrestrial ecosystems and the unsustainable use of precious natural resources. The legislation allows Hong Kong to showcase its determination in being Asia’s World City by deterring IWT and by contributing to global efforts in preventing biodiversity loss.”

Since 2015, WWF has been attaching great importance to illegal wildlife trade and we have been strongly advocating its inclusion in the OSCO, along with other conservation organisations. We welcome this passage of the Bill by the HKSAR Government, and the Bill to ban the local ivory trade with increased penalties to maximum imprisonment term of 10 years for smuggling of endangered species.