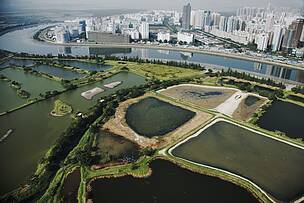 Mai Po
© Martin Harvey / WWF
In response to 2021-2022 policy address, WWF-Hong Kong agrees the HKSAR government’s overall goal of achieving carbon neutrality before 2050 and its vision to formulate a conservation policy along the proposed Northern Metropolis Development Plan.  However, the government must implement an active and holistic management plan to ensure the ecological integrity of the Deep Bay wetland ecosystem is preserved. WWF-Hong Kong also calls for transparent stakeholder and public consultation as a vital engagement process.

“With over 40 years of experience in wetland conservation and active management, WWF-Hong Kong is committed to the long-term conservation of every habitat within the area, including fishponds, which are important, irreplaceable natural resources and should be conserved. These ecosystems support local livelihoods and economies. In fact, we strongly urge the government to include the other wetlands to create a Greater Mai Po wetland as a climate adaptation strategy for this world-renowned wetland,” says Nicole Wong, CEO, WWF-Hong Kong. “We strongly believe that development and biodiversity conservation can be integrated in mutual ways to sustain both in a world now dealing with a climate crisis that has now become a critical existential threat to humanity and other biodiversity.”

Conserve wetlands to build climate resilience
The mangroves and other wetlands in Mai Po and elsewhere in Hong Kong are important as coastal buffers against the impacts of climate change, especially the strong storm and tidal surges that we expect to occur more frequently, and with greater severity. Conserving these wetlands as a climate adaptation strategy is a community priority. Therefore, the government should apply a ‘no further conversion of wetlands’ policy, supported by regulations, to all of Hong Kong’s coastal wetlands.

WWF-Hong Kong cannot support any new development within the Wetland Conservation Area (WCA) and any high-density development in the Wetland Buffer Areas (WBA), which have been declared as such because of their importance to support biodiversity conservation, scientific values, and their contributions to ameliorating climate change impacts. They also contribute immensely to regional and global biodiversity conservation. Thus, the government must follow the designation purpose of WCA, which was to protect the ecological integrity of the Ramsar site from incompatible development. As for development within WBA, it must strictly follow the Town Planning Ordinance and Outline Zoning Plans’ general planning intention. Incompatible developments will pose threats to the biodiversity in the Deep Bay and Mai Po Inner Deep Bay Ramsar Site.

Dr Eric Wikramanayake, Director of Wildlife and Wetlands, WWF-Hong Kong stresses the importance for the government to secure the wetlands in the Mai Po Inner Deep Bay Ramsar Site. “Wetland Conservation Area and Wetland Buffer Area are important to retain for their ecological functions and services, including those wetlands under private ownership. They also sustain the integrity of the Ramsar site and the East Asian-Australasian Flyway (EAAF) and are part of the climate adaptation strategy.”

Protected areas to safeguard marine wildlife from development
Our oceans are home to many wildlife species, including Chinese white dolphins, finless porpoise and horseshoe crabs, but only 5% of the waters are designated or planned marine protected areas. We urge the government to implement a roadmap to increase coverage of effectively managed marine protected areas (MPAs) to cover 30% of Hong Kong waters by 2030, a globally accepted target that is scheduled to be adopted at the upcoming Convention on Biological Diversity COP15 hosted by China.

WWF-Hong Kong opposes Lung Kwu Tan reclamation and also the Central Water Artificial Island. The former would destroy habitat for Chinese white dolphin and the latter, damage Hong Kong’s ocean biodiversity and other ecosystem services. The government must reassess the cumulative impact from all development and effectively manage all critical habitats. WWF-Hong Kong is also concerned about the possible amendment of the Protection of the Harbour Ordinance.

To effectively protect our waters and critical habitats, marine spatial planning should be adapted in the future development plan. Professor Laurence McCook, Director of Oceans Conservation, WWF-Hong Kong explains, “The government should include marine spatial planning, alongside a roadmap for MPAs to cover 30% of Hong Kong waters by 2030, with effective site-specific management plans. These areas should include a development-free Dolphin Conservation Management Area off western and southern Lantau to conserve this endangered species in Hong Kong.”

To conclude, we must commit to achieving a nature-positive Hong Kong by 2030, and, by 2050, to fulfilling the shared vision of living in harmony with nature, where biodiversity is valued, conserved, restored, and wisely used, thereby maintaining ecosystem services, sustaining a healthy planet, and delivering benefits essential for all Hong Kong people, especially to survive the climate crisis that is now upon us.

Please refer to details of our Policy Address recommendations here.