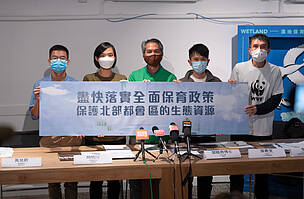 From left: Samuel Wong (Project Officer of Designing Hong Kong), Ms. Woo Ming Chuan (Deputy Director of the Hong Kong Bird Watching Society), Dr. Cheng Luk-ki (Director of Green Power), Roy Ng (Campaign Manager of The Conservancy Association), Tobi Lau (Senior Manager, HK Biodiversity and Conservation Policy at WWF-Hong Kong)
© WWF-Hong Kong
Today, five green groups released a recommendation statement on the Northern Metropolis Strategy, calling for a holistic conservation policy and timetable for the protection of sites of conservation importance. In the Northern Metropolis Strategy launched in October 2021, the formulation and implementation of a proactive conservation policy was stated clearly and three Wetland Conservation Parks (WCP) covering over 2,000 hectares were proposed. While such a decision was widely welcomed, a series of measures and actions are required to ensure that current conservation efforts will not be compromised by future developments.

“The connectivity of wetlands is vital to providing important ecosystem services to us. The future development of Northern Metropolis is a massive project, thus an integrated approach must be adopted.  Driven by an effective land resumption mechanism, we look forward to seeing an extension of the current Ramsar site and the enhancement of the integrity of the Deep Bay wetland ecosystem with the implementation of a holistic conservation strategy.” said Tobi Lau, Senior Manager, HK Biodiversity and Conservation Policy at WWF-Hong Kong.

While conserving the ecologically important sites, we must not underestimate the impact from the future development projects. “In recent years, developers have been actively proposing different residential and commercial projects in Wetland Buffer Area (WBA). Many wetlands and farmlands in the proposed Northern Metropolis have been suffering relentlessly from environmental destruction, such as land levelling, land filling and pond filling. Meanwhile, projects such as railway and residential development, as well as the construction of innovation and technology parks will take place in the Northern Metropolis in the future. Therefore, if any of the development projects fail to avoid and minimise the impacts on ecologically important sites, the effectiveness of the existing conservation measures will be greatly undermined and the integrity of the ecosystem will be destroyed.” said Roy Ng, Campaign Manager of The Conservancy Association.

“In order to halt the further encroachment of brownfields to the wetlands in NWNT in developing Northern Metropolis, the existing laws to protect the conservation land use of the wetlands must be maintained, including Town Planning Board Guidelines 12C in Town Planning Ordinance and the Environmental Impact Assessment Ordinance. These ordinances should be effectively and efficiently enforced to manifest ‘Proactive Conservation Policy’.” said Dr. Cheng Luk-ki, Director of Green Power.

Ms. Woo Ming Chuan, Deputy Director of the Hong Kong Bird Watching Society, said “The value of the wetland ecosystem lies not only in the natural habitats, but also the proactive management of the local fishermen over the decades. Their livelihood and experience in fish farming should be treasured and respected, and their engagement as stakeholders and managers of the fishponds and wetlands is crucial to the planning and management of the future Wetland Conservation Parks and Northern Metropolis.” It is also important to ensure wetlands in the Deep Bay area will not be destroyed during the transition from policy announcement to the official designation of the protected areas. Ms. Woo added, “Private landowners may have different expectations for the land resumption process and may change the current operation of wetlands, which may harm the ecological integrity of the Deep Bay wetlands. The Government should take corresponding measures to protect the ecological values of wetlands during the transitional period and establish a clear timeframe for land resumption."

Conservation should be prioritised for the future designing and development of the Northern Metropolis. “With the gradual implementation of the development of the Greater Bay Area, a rapid increase in human activities across the area is inevitable, exerting certain pressure on the environment and ecology. In the face of growing development pressure, the Hong Kong government should regard conservation as the essential component and principle of future urban planning and design to ensure that the environment and ecology of the city will not be destroyed despite ongoing development. Hong Kong can also stand out as a role model for other cities in the coexistence of urban development and rich ecology, as well as remarkable performance in nature conservation,” said Samuel Wong, Project Officer of Designing Hong Kong.