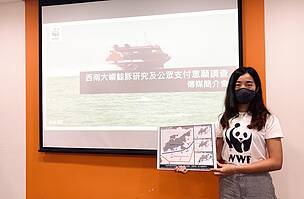 This shows that white dolphins immediately benefit from the cessation of fast ferries, which used to frequently travel through the fairway before the COVID-19 pandemic. With larger and less disturbed habitats at their disposal, Chinese white dolphins were observed to forage and socialise more often. They also exhibited milling and resting behaviours that had not been recorded near the fairway over the previous five years.

This Saturday (July 23) is World Whale and Dolphin Day, and WWF calls for urgent marine traffic mitigation measures to be enacted before the resumption of high-speed ferry operations. These measures need to reduce underwater noise disturbances and provide better conservation for key dolphin habitats in Hong Kong waters. And they have popular support: a recent WWF “passenger willingness to pay” survey indicated that over 80% of survey respondents agree that high-speed ferry operations can potentially threaten the survival of local dolphins. Nearly 70% of the respondents chose “rerouting ferries southward” as their preferred option to conserve cetaceans (including finless porpoises) off southern Lantau.

Chinese white dolphin numbers in Hong Kong have dropped by over 80% in the past 17 years, with marine traffic identified as one of the main threats to their survival. Then there are the more cryptic and less-studied finless porpoises: they are also susceptible to underwater vessel noise and also venture into the southern fairway, as revealed by WWF’s multi-year acoustic monitoring study conducted before fast ferries stopped operating. Severe underwater noise can reduce white dolphins’ listening space by as much as 45%, causing them to have difficulty avoiding danger, locating prey and finding other dolphins. The suspension of fast ferry operations has given our local cetaceans a less disturbed area off southern Lantau and they have used this area more actively.

Lydia Pang, Interim Head of Oceans Conservation at WWF-Hong Kong reports that, “Our studies, conducted before and during the ferry cessation period, highlight the ecological importance of the waters of southern Lantau to Chinese white dolphins and finless porpoises. Although WWF welcomes the designation of the South Lantau Marine Park, the South Lantau fairway still traverses ecologically important waters frequented by local cetaceans. It’s crucial to link these key cetacean areas with buffer areas to secure habitat integrity and continuity and ensure that our local cetaceans have ‘room to roam’ by maintaining population connectivity.”

WWF-Hong Kong commissioned the Hong Kong Public Opinion Research Institute (HKPORI) to conduct a survey of proposed options to mitigate vessel traffic impacts off southern Lantau to understand cross-border travel patterns and public willingness to pay for local cetacean conservation. Of the four suggested measures provided, “rerouting the fairway southward” was the most preferred; followed by “restricting ferry speeds”, “using land-based travel”, and “reducing voyages”. Regarding their willingness to accept increases in fare and travel time to promote local cetacean conservation, the majority of respondents accepted up to 7 minutes of increased travel time and a fare increase of up to HK$6 per passenger. Travellers also accepted an increase in ferry frequency to 28 minutes in the daytime and 40 minutes at night.

The survey went on to explore the idea of flexibly reducing ferry operations when passenger loads were smaller, such as afternoons and late at night. Potential ways to encourage land-based travel along the Hong Kong-Zhuhai-Macao Bridge were also identified, including optimising ancillary transportation facilities and offering bus ticket discounts or package sales.

Doris Woo, Project Manager for Cetacean Conservation at WWF-Hong Kong concludes, “The suspension of high-speed ferry operations during the COVID-19 pandemic has given local cetaceans an unexpected, though temporary, respite from marine traffic disturbances. Our survey shows that the public strongly support implementing dolphin-friendly vessel measures off southern Lantau. It’s the right time for the government to work jointly with the industry, maritime and ecological experts, conservationists and relevant stakeholders to explore the feasibility of rapidly implementing these preferred options to minimise vessel traffic impacts before fast ferries resume. ” 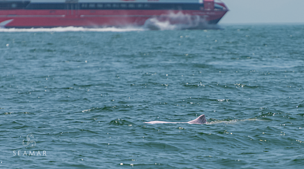 Key dolphin habitat has been found to spatially overlap with south Lantau fairway
© SEAMAR Enlarge
Like this article?