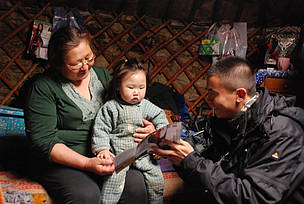 Dr Lew Young was a passionate conservationist dedicated to the conservation of Asia’s wetlands and waterbirds. As part of the WWF-Hong Kong team managing Mai Po Nature Reserve from 1991 to 2008, he was actively involved in the designation of the Mai Po Inner Deep Bay Ramsar Site, as well as launched the wetland management training programme and created education programmes for students and visitors.

In 2008, Dr Young was appointed Senior Regional Advisor for Asia and Oceania for the Ramsar Secretariat and provided support on the strategic development and effective implementation of the Convention. Dr Young joined the East Asian-Australasian Flyway Partnership Secretariat as Chief Executive in 2018, during which time he developed the 2019-2028 Strategic Plan and DPR Korea joined both the Ramsar Convention and the Partnership.

On 5 March 2019, Dr. Young passed away while on a work trip to develop conservation actions for the intertidal wetlands of the Yellow Sea in Beijing.

In 2019, WWF-Hong Kong set up the WWF Dr Lew Young Grant in honour of his dedicated work and major contribution to wetland conservation. The maximum amount of the grant is US$10,000 per project.

About the AFI Grant

In 2019, WWF established the Asian Flyways Initiative to coordinate among the various organisations and stakeholders to ensure that both the EAAF and the CAF are conserved so that ecologically connected stepping-stone corridors can be sustained for long-distance migratory birds, and the wetlands are managed for nature and people.

To provide support to the conservation work of wetlands and migratory birds in these two flyways, WWF-Hong Kong established the AFI Grant. The maximum amount is US$5,000 for one-year projects or US$5,000/year for multiple-year projects (2-3 years).

More information about the AFI can be found here.

The next application deadline will be on 31 March 2022.

How to apply for the Fund