Hong Kong: Biodiverse but not Bio-aware 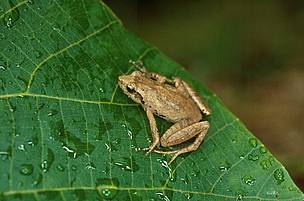 Romer's tree frog
© Michael Lau / WWF-Hong Kong
May 22 has been designated International Day for Biological Diversity by the United Nations to increase understanding and awareness of biodiversity issues. The date was selected to commemorate the adoption of the text of the Convention on Biological Diversity, which occurred on 22 May, 1992. The Convention was extended to Hong Kong in 2011, meaning that looking forward, our nature conservation policies and measures need to be in line with the Convention.

Hong Kong is famous for being a compact urban centre and a concrete jungle, but the city also has surprisingly rich biodiversity. Thousands of square kilometres of rugged coastline, mountain ranges and country parks make Hong Kong home to a wide range of wildlife. Located in the transition zone between the world’s tropical and temperate regions, the city’s biodiversity is much greater than usual for such a small area. Making their home here are almost 3,000 varieties of flowering plants, including 120 orchid and over 300 native tree species; and more than 2,000 moth, 110 dragonfly and 230 butterfly species. Over 500 bird species, one-third of the total number of bird species in China, can be found in Hong Kong. Hong Kong has an amazing marine biodiversity too, which includes around 1000 marine fish species and over 80 hard coral species (more than the entire Caribbean Sea).

The jewels in Hong Kong’s biodiversity crown are several unique and precious species. Examples include Romer's tree frog and Bogadek's burrowing lizard, which are endemic to Hong Kong ; “endemic” means that the species are found in Hong Kong but nowhere else in the world. One-fifth of the global population of endangered Black-faced spoonbills also winter in Mai Po and Deep Bay every year. Hong Kong has an amazing marine biodiversity too, which includes around 1000 marine fish species and over 80 hard coral species (more than the entire Caribbean Sea),

Yet these priceless treasures have, to date, not been afforded the vigorous protection they deserve. In this year’s policy address, the Hong Kong SAR government announced that they would be taking forward the Convention on Biological Diversity. To realize this, a public consultation exercise will be conducted in 2013 on the formulation of a Biodiversity Strategy and Action Plan for Hong Kong. We look forward to a comprehensive, robust and forward-looking public engagement plan.

WWF works tirelessly to bring biodiversity into the mainstream across governments and societies around the world. WWF-Hong Kong is working to ensure that the Hong Kong government starts integrating biodiversity values into its development and planning processes.

Water and Biodiversity
Everyone knows that water is essential to biodiversity. At the same time, it is an under-acknowledged fact that biodiversity plays a vital role in maintaining both the quality and quantity of water supplies. To raise awareness about this vital inter-relationship, “Water and Biodiversity” is this year’s theme for International Day for Biological Diversity.

Water moves around the planet in the water cycle. This cycle is heavily influenced by ecosystems: forests, grasslands, soils and wetlands all have a myriad of hugely significant effects on water. Vegetation cover regulates the movement of water across the land’s surface and the infiltration of water into soils. Biodiversity supports the cycling of both water and nutrients in soils and the majority of plants, including all food crops; and together these processes control land erosion and regulate water quality. Plant transpiration is also a major contributor to local and regional humidity and rainfall. Wetlands perform hydrological functions such as water storage, which means that some wetlands can regulate flooding. 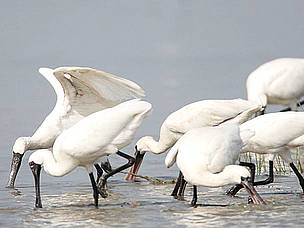 Black-faced spoonbill
© John and Jemi Holmes Enlarge
Like this article?