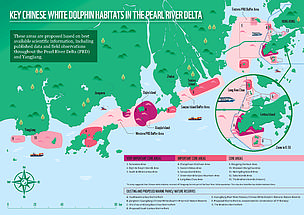 Key Chinese White Dolphin Habitats in the Pearl River Delta
© WWF-Hong Kong
[HONG KONG – 28 May 2020] WWF-Hong Kong and partners today released an Emergency Action Plan for the Pearl River Delta Population of the Chinese White Dolphin that may represent our last chance to save the species. “The Chinese white dolphin is a unique and shared heritage of Hong Kong, Macau and Guangdong. It would be a global tragedy to lose this iconic creature from the future of the Greater Bay Area. The governments, businesses, and people of the delta region should seize this last chance to save our Chinese white dolphins,” said Dr Laurence McCook, Head of Oceans Conservation, WWF-Hong Kong.

The Pearl River Delta is home to what is likely the world’s largest population of the Chinese white dolphin. Due to threats from human activities, about 2,000 individuals are left and the population appears to be rapidly heading below the minimum number needed to sustain it. Dolphin populations grow slowly, making them vulnerable to minor environmental changes. The delta’s Chinese white dolphins, including Hong Kong’s dolphins, are on the brink of disappearing.

“We are calling on the Hong Kong government to commit to the implementation of the Emergency Action Plan, starting with the designation of the Dolphin Conservation Management Area to protect important feeding and socializing habitats in western and southern Lantau waters by 2024. The government needs to fulfil Hong Kong’s obligation under the Convention on Biological Diversity (CBD) as well as its own commitments for dolphins under the city’s Biodiversity Strategy and Action Plan (BSAP). We cannot wait any longer,” said Doris Woo, Conservation Officer, Oceans, WWF-Hong Kong.

Southern and western Lantau provides a long and continuous natural coastline with abundant prey, making it a critical dolphin conservation management area. This area has become particularly important for dolphins since 2015 when they moved away from large-scale developments in northern Lantau.

”The government should prioritise this area and implement an adaptive management plan with immediate effect given its profound importance to the dolphin. The area should be managed now with a view to becoming a no-take and no-development zone, with limited boat traffic and minimal human activities,” said Dr. Lindsay Porter, Senior Research Scientist, University of St Andrews.

The Emergency Action Plan, developed by organisations in both Hong Kong and Guangdong, is designed to give the delta’s dolphins a chance to stabilize and recover. A set of core and buffer areas covering key dolphin habitats, including the Lantau Dolphin Conservation Management Area, are recommended, with management measures to diminish the impact of threats.

“Cross-boundary cooperation between the Guangdong, Macau and Hong Kong administrations is crucial for dolphins’ conservation management to be successful. The Emergency Action Plan lays out a framework to promulgate and kick-start an urgent process in which governments can take the lead in activating timely and appropriate actions. This must be followed by a longer-term plan incorporating input from academics, industries, ferry and dolphin watching tour operators, and affected members of the public, such as recreational boaters and fishers,” said Professor Kenneth Leung Mei-Yee, School of Biological Science, Faculty of Science, HKU.