WWF Continues the Journey with Migratory Birds: Nearly 2,000 migratory shorebirds have been flagged in Hong Kong over the past 11 years 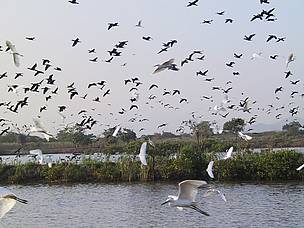 Flock of birds
© WWF-Hong Kong
Today, WWF-Hong Kong announces several recent successes in our shorebird flagging programme as a celebration of World Migratory Bird Day this weekend. During April and May 2012, two Grey plovers and several Curlew sandpipers, which were tagged in Hong Kong, have been resighted on the shores of the Yellow Sea, approximately 2,000km north of Hong Kong. The resightings reaffirm the importance of the Yellow Sea as a staging site for Hong Kong’s migratory shorebirds, as previous research data has shown.

Katherine Leung, Reserve Officer at WWF-Hong Kong, explained the importance of the shorebird flagging programme, “Under the coordinated scheme implemented along the East Asian-Australasian Flyway, and aided by coded and engraved colour leg flags, we can identify individual birds in the field through direct observation without having to re-capture the same bird. This resighting information is vital for shorebird conservationists, as it helps them locate important shorebird sites and strategically apply their conservation efforts.”

Since 2010, the Hong Kong Bird Ringing Group in collaboration with WWF-Hong Kong, has adopted a new shorebird-marking technique using unique coded-engraved colour leg flags. These flags enhance data quality and reveal information about shorebird movements, both locally and across the border. So far, these new colour flags have been deployed on almost 800 birds, and over 40 percent of them have been resighted.

The Yellow Sea is a key staging site for migratory shorebirds along the East Asian-Australasian Flyway. At the same time, coastal wetlands bordering the Sea are critically under threat. Conservationists have expressed concern at the alarming loss of coastal wetlands in this area to various forms of development. Both WWF-Hong Kong and WWF-China, together with other international organizations, are increasing their focus on conserving this important wetland area.

The theme of World Migratory Bird Day this year is ‘Migratory Birds and People - Together through Time’. Echoing this theme, Katherine shared her own close ties with migratory birds, “I was fascinated to see that my personal ‘migratory path’ crossed with a Great knot that I tagged in the northwest of Australia in November 2008, which I resighted at Mai Po in April 2009. The bird is still alive and has been resighted annually in the northwest of Australia.”

Bird ringers working along the East Asian-Australasian Flyway follow a coordinated leg-flagging scheme, whereby different colour combinations are used on leg flags in different regions or countries. WWF-Hong Kong, together with volunteer bird ringers, first participated in the coordinated leg-flagging scheme in 2001. Since then, nearly 2,000 shorebirds from 36 species have been fitted with the unique Hong Kong combination "white over yellow". The Mai Po Inner Deep Bay Ramsar Site continues to be a crucial site for migratory waterbirds, with over 72,500 waterbirds wintering in Deep Bay over the past winter (December 2011 to February 2012). This total is similar to the number recorded in the past five years, when the waterbird populations have been the highest since regular surveys began in the early 1980s.