Planting a Sustainable Seed in the Chinese Restaurant Sector 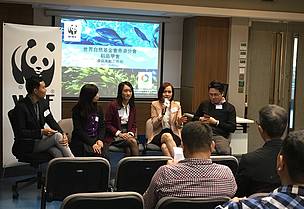 IDA Sharing Session
© WWF-Hong Kong
New studies are once again ringing alarm bells about our unsustainable seafood consumption and how it could drive large numbers of species towards extinction. Taken together, the studies show that at least 17 species of live marine fish sold in local wet markets and one third of species traded as shark fin in the city are globally threatened – that means they face an immediate threat of extinction. However, the studies don’t reveal the good news, which is that Chinese restaurants can play a major role in reducing consumption of the threatened species.

A sustainable seafood business event in late November, co-organised by the WWF-Hong Kong and Institution of Dining Art aimed to spread the message of ocean conservation, the importance of conservation through phasing out consumption of threatened species and the promotion of sustainable seafood instead. The 21 participants from 11 restaurant groups and organizations also heard examples of businesses that had thrived on sustainable principles.

One clear example of how caterers can play a successful role in conservation is the way that they have successfully adapted to mounting criticisms from environmental groups over serving shark’s fin. Tracy Tsang, WWF-Hong Kong’s Senior Programme Officer for Oceans Sustainability pointed out that, despite shark’s fin soup reputation as a sought-after traditional dish, a study released in 2014 showed that 70% of respondents stated that they had stopped or reduced shark’s fin consumption in the past five years with little impact on their bottom line.

Tsang told the participants, “According to WWF-Hong Kong’s Shark Fin Consumption Survey of Caterers, caterers who had reduced or banned shark’s fin dishes, their overall business has remained steady, that is there has not been much negative impact. Leading Chinese restaurant chains should carefully reconsider the risk of serving shark’s fin while also knowing that phasing it out may not impact overall profitability at all.”

One company that is pioneering such an approach is Café de Coral Group, whose representative shared the company’s experience at the event. The group operates different key strategic businesses, such as fast food, institutional catering as well as casual dining and has committed itself to sustainability. The Corporate Director, Procurement of Café de Coral Holdings Limited, Wing Lau said that the group had begun by developing a sourcing framework with food safety and sustainability as key priorities. A commitment to traceability and responsible harvesting meant that the group now sources both MSC-, ASC-certified seafood items as well as the seafood recommended in WWF-Hong Kong Seafood Guide. She also explained that communication to customers is equally important as this can raise public awareness of sustainable seafood.

Another source of information for caterers is the Fish Marketing Organization (FMO), a statutory body that operates seven wholesale fish markets in Hong Kong. Its ocean friendly catalogue is a listing that aims to promote a better understanding of the origins and related information of seafood. This is especially useful for Chinese restaurants that rely relatively more on seafood sourced in local or nearby waters, such as the seafood caught in South China Sea or locally- or China-farmed seafood. Henry Yip, Market Manager (Marketing), Fish Development Section of the FMO, noting that consumption of sustainable seafood is a rapidly-growing trend, told the participants that his body works with WWF-Hong Kong to produce its catalogue, promoting such seafood. The catalogue also has information on some of the sustainable fishery products that come from the Hong Kong Accredited Fish Farm Scheme.

By organizing this seminar, WWF-Hong Kong hopes to encourage more Chinese restaurants to join the movement to safeguard our precious ocean resources, to seize upcoming opportunities and minimize risk of serving threatened species in their businesses. The findings of the Fish Tank Index survey 2014, showed that out of the seafood items that have been assessed by WWF globally in terms of sustainability, 65% of the seafood range sold in the Chinese restaurants was unsustainable seafood. There is ample room for seafood sustainability improvement in the Chinese food and beverage sector.  Sustainable businesses must rely on sustainable ocean resources. Together, we can create a sustainable future for humans and the oceans!

This project is funded by the Sustainable Development Fund