Drug, crime, overfishing - the untold story of our seafood consumption 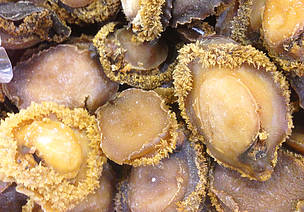 8 Dried abalone stored in a glass jar in Hong Kong
© Wilson-Lau
The Lunar New Year brings with it the traditional festivities associated with the turning point in the Chinese calendar. It’s a time for social gatherings and banqueting, be that with friends, family or at company events. It’s also a time when we tend to treat ourselves to items that are luxuries the rest of the year, such as premium seafood – a banquet doesn’t seem complete without groupers and abalone on the menu. It’s a luxury that comes at a price to the species as well as the consumer, as consumption is driving the worldwide decline in these species’ wild populations. Two studies released just before the Lunar New year also reveal that the market for grouper and abalone is linked with illegal activities in their source countries.

As revealed in research by TRAFFIC, South African abalone populations have been heavily impacted by illegal harvesting of the shellfish in the wild. The species, unique to South Africa, is often dried and then smuggled out of the country to other destinations in Africa to be re-exported more easily from the continent. An estimate based on trade data from multiple countries indicates that about 65% of all dried South African abalone reaches the market this way.

Hong Kong plays a key role in both the legal and illegal trade – the research reveals that the territory imports about 90% of all dried abalone from Africa, all of it believed to be specifically from South Africa. The implications are clear – consumers ordering dried South African abalone here have a very high chance of directly supporting products poached and smuggled from Africa. The sale of poached and smuggled abalone finances crime syndicates that are also involved in the drugs trade. Drug abuse and poaching go hand-in-hand as addicts pay for drugs by catching abalone illegally. It has become a significant social issue faced by many South African coastal communities. The consumption of wild South African abalone, often sold dried in Hong Kong, has strong links to unsustainable fishery, illegal activities and social instability.

Our consumption of live reef food fish has been putting unprecedented pressure on another already-overexploited natural resource, and on some occasions our consumption can be linked to illegal trade in these species, according to research by WWF-Hong Kong trustee Professor Yvonne Sadovy.

Sadovy’s research shows that the trade in live reef food fish totals some 20,000-30,000 metric tonnes annually and is worth more than US$ 1 billion. It’s mostly a wide variety of species of groupers that are traded but also the humphead wrasse. The city is a key point both for the trade and consumption of these live fish.

Collected from the wild or produced by mariculture, these live fish pass along an extended trade route to reach Hong Kong from major source countries such as Indonesia and the Philippines. A considerable amount of them are further re-exported to the mainland, to cater to increasing demand in Guangzhou, Shenzhen, Shanghai, Beijing, Qingdao and beyond. Unsurprisingly, current market demand is driving unsustainable fishing of many grouper species, which are late to mature, long-living, and sometimes even aggregate to spawn. These biological characteristics make them particularly vulnerable to high fishing pressure.

Several grouper species that make up the trade have been overexploited to the extent that they are considered ‘threatened’ or ‘near threatened’ species according to the IUCN: squaretail coral grouper, Hong Kong grouper, camouflage grouper, tiger grouper.

The humphead wrasse, though not a grouper per se, has been extensively fished and its trade is regulated by the CITES. Nonetheless, an earlier study revealed weaknesses in the implementation of the regulation that has allowed the rampant illegal trade in humphead wrasse to continue in our city.

Although the two studies look at very different types of marine resources, different source countries and different issues along the supply chain, there are great similarities in the ways that the situations can be turned around. Governments on both the demand and supply sides have an undeniable part to play in better managing fishery resources and more extensively regulating and monitoring the trade. Businesses need to take a more proactive role in sourcing sustainable seafood. For consumers, as responsible seafood lovers, the onus is on us to make wise choices.

Want to have some clues on what to choose and what to avoid in the upcoming festive season? Download our seafood guide smartphone apps to learn more.

8 Dried abalone stored in a glass jar in Hong Kong
© Wilson-Lau Enlarge
Like this article?