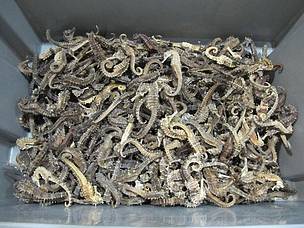 Little Seahorse Critters Belong in the Ocean
© Hong Kong Customs and Excise Department​
The wonder of seahorses
If you are lucky enough, you can sometimes spot three different seahorse species in eastern Hong Kong waters – the yellow seahorse, three-spot seahorse and great seahorse. The creatures remain an enigma in the world’s oceans. From the genus Hippocampus, the Greek words for horse (hippos) and sea monster (campus), seahorses are truly unique marine animals, characterized by their anchoring tails and elongated sucking snouts. Apart from their special equine shape, they also have an extraordinary life history. Seahorses mate for life while males bear the unborn young. However, the population of seahorses is decreasing worldwide primarily due to rampant harvesting for Traditional Chinese Medicine. Seahorses are often caught from the sea and hanged under the Sun to wriggle to their deaths. Ocean-lovers are now asking if they will become extinct in the near future.

Illegal trading of dried seahorses
As recently as June this year, 140 kg of suspected dried seahorses and 220 kg of dried shark fins from Indonesia, with an estimated market value of HK$420,000 were seized at the Customhouse Cargo Examination Compound. Two company directors have been arrested on suspicion of smuggling. According to the Protection of Endangered Species of Animals and Plants Ordinance, importing and exporting any species listed in CITES Appendix II without a license carries a maximum penalty of 10 years in jail and a HK$10 million fine. WWF-Hong Kong not only condemns the illegal trading activities of dried seahorses in Hong Kong, but we also hope consumers will think twice before buying dried seahorses as a cooking ingredient.

Seahorses as traditional Chinese medicine
You have no doubt seen dried seahorses in soup packages, a common enough sight in markets and Chinese medicine shops. According to data from Census and Statistics Department, over 7000 kg of dried seahorses (equivalent to about 2.2 million of seahorse) were imported into Hong Kong in a year. Seahorses are believed to have over 200 therapeutic properties and with powers to rival those of ginseng. They have been used for over 2000 years to treat a range of illnesses including asthma, arteriosclerosis, incontinence, difficult childbirth and impotence.
The popularity of seahorses as medicine is driving the widespread sale of the animal in Taiwan, Indonesia, China, Hong Kong and other Asian countries. Harvesting undersized seahorses leaves them with no chance to mature and breed. Worse, overexploitation has driven some seahorse species into local extinction.

The fate of seahorses is in your hands
The traditional use of seahorses in medicine is putting them at acute risk. Research studies show that nearly all traded seahorses are sold for use in traditional Chinese medicine. At present 11 out of the 55 seahorse species are classified as “Vulnerable” and “Endangered” under the IUCN Red List of Threatened Species, including those found in Hong Kong waters. Although all species of Hippocampusseahorses have been included in the CITES Appendix II since 2004, which regulates and certifies all trade, smuggling is not unusual due to the huge profits. Hong Kong is an important consumption hub of dried seahorses. Therefore we play a critical role in conserving seahorses by not buying them dried. Be a responsible consumer and protect precious marine animals. 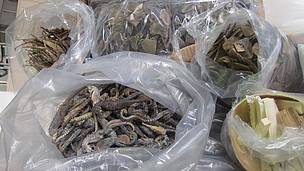