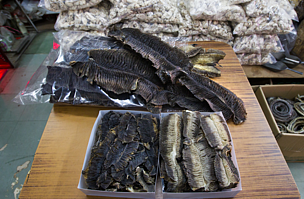 As Hong Kong is a leading global seafood hub, trade statistics gathered by the government can help deepen our understanding of the threat to various marine species. The WWF-Hong Kong is asking the government to revise the way it categorizes certain seafood commodities that are imported, exported and re-exported through the territory to make  trade data more precise and accurate. In June WWF-Hong Kong requested the Census and Statistics department to specifically create a new  Hong Kong Harmonized Commodity System Codecode for the ray gill raker and all forms of grouper.

Hong Kong Harmonized Commodity System Codes or HKHS codes classify goods and are adapted from the six-digit World Custom Code Harmonized System Code (WCO HS code). The Census and Statistics department of the Hong Kong government adds two additional digits to the six-digit code to ensure better monitoring of specific goods.  Those codes are used on declarations made by by importers and exporters operating in the territory.

However, in terms of the seafood trade, the codes are sometimes too general. In light of this, WWF-Hong Kong has been working closely with other local environmental NGOs to propose improvements to the existing system. In previous years environmentalists have succeeded in persuading the Census and Statistics department to create new codes for  Fresh/Chilled Shark fin, Frozen shark fin, Live hybrid groupers and fish maw.  However, the department has yet to adopt certain other proposals.

One proposal is to create a code to allow for the monitoring of trade in ray gill rakers, which are commonly found in Traditional Chinese Medicine shops. As the gills are derived from Manta ray or Modula ray, the international trade in which is strictly regulated by the Convention on International Trade in Endangered Species of Wild Fauna and Flora (CITES), it is therefore important to improve the traceability for these products through the establishment of a specific HKS code.

The creation of a HKHS code for fresh or chilled grouper and frozen grouper is also vital. Frozen grouper has been increasingly available in recent years, especially in supermarkets. The trade can involve species that are already of conservation concern or sourced from unsustainable fisheries. Yet the trade records for these forms of grouper are most likely grouped with other marine fish traded in the same frozen form. Separate trade codes will give scientists vital help scientists devising better-informed conservation action and allow the public to have a better understanding of the scale of the trade.

WWF-Hong Kong has once again made clear our concern to the C&S Department in June 2017. The implementation of these recommendations will definitely help the planning and implementation of comprehensive conservation action and policies for species impacted by trade.