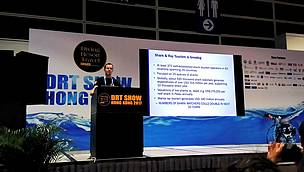 Diving expo
© WWF-Hong Kong
The struggle to preserve shark populations takes many forms. WWF-Hong Kong has worked with stakeholders including caterers, corporations and the public over the years to reduce shark’s fin consumption. However, responsible consumption alone will not be enough to conserve these beautiful creatures. The organisation has also taken the complementary approach of inspiring awe and respect for sharks and rays through encouraging best practice in operating shark ecotourism.

The numbers show that the potential value of a living shark is much higher than a dead one used to make shark’s fin soup. Shark ecotourism across the world generates US$314 million a year and it is believed that annual revenue could more than double to US$780 million in the next 20 years. It’s a different story for the fishing industry. The current landed value of global shark fisheries is US$630 million and has been declining for a decade.

The guidebooks were introduced and distributed at DRT Hong Kong. WWF-Hong Kong hopes shark and ray tourism operators will be inspired by the guidelines to become responsible operators and help to educate their customers to be responsible divers.