Whale Shark and other endangered sharks 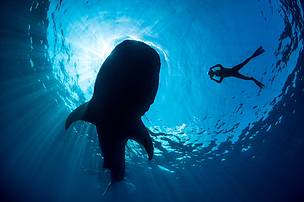 Whale Shark and other endangered sharks
© naturepl.com / Alex Mustard / WWF
Last May a video of a whale shark spotted by Hong Kong fisherman went viral on social media platforms. Although, it’s not certain that the creature was in the territory’s waters, the rare visit from this endangered shark species serves as a good reminder that we should treasure Mother Nature and her glories.

A gentle giant of the world’s oceans, the whale shark is the biggest fish on the planet. Highly migratory and swimming for long distances, mature adults can achieve a body length of 12 metres. It’s not just their size that fascinates, whale sharks also have unique patterns of yellow and spots and scientists can use the pattern just above the pectoral fin to identify individuals. In 1995 a female was captured and found by scientists to be bearing 300 pups. As mainly plankton feeders, whale sharks gather in areas where their food is abundant, creating sightseeing spots in countries such as Indonesia, the Philippines and Mexico.

Unfortunately, the whale shark has suffered a change of status on the IUCN red list. Once listed as “Vulnerable”, the species has since 2016 been considered “Endangered”, implying that more should have been done by different stakeholders to protect the shark. However, the catch of whale shark is currently prohibited in some countries and regions, including China and Taiwan.

On the Hong Kong market, whale shark fin is most commonly seen used as a trophy display in dried-seafood shops. Surveys over the last decade have highlighted that whale shark is not a commonly-consumed species but raised worries over other endangered shark species such as the scalloped hammerhead shark and great hammerhead. Some one quarter of sharks and related species are threatened with extinction, with overfishing the main threat to them.

Hong Kong accounts for about 40 percent of the global trade in shark fin but also bears responsibility for much of the consumption. Conservation action taken here is highly essential in the global campaign to conserve sharks. According to a survey released in 2015, people in the territory mostly consume shark fin at restaurant-hosted wedding banquets. WWF-Hong Kong urges caterers to stop serving shark fin to show their strong commitment towards ocean conservation.

To help our supporters find shark-fin-free restaurants, WWF-Hong Kong has prepared a list of caterers highlighting those that have imposed a ban on serving it. Please join this industry initiative to save sharks!