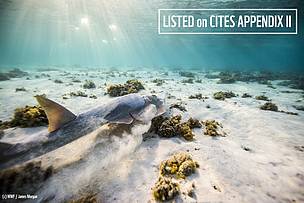 All 6 species of giant guitarfish have been assessed as Critically Endangered by the IUCN
© WWF / James Morgan
Tougher regulations on the international trade of sharks and rays was ratified on 28 August at the CITES global wildlife conference in Geneva, providing unprecedented levels of protection for these Near Threatened and Endangered species. The listing to Appendix II of the Convention on International Trade in Endangered Species of Wild Fauna and Flora (CITES) covers all 16 species of giant guitarfish and wedgefish, and two species of mako shark. The decision, made at 18th meeting of the Conference of the Parties (CoP18), serves to control the international trade by requiring export permits and re-export certificates to trade globally, ensuring these species and their products are legally sourced, and the overall fishing level does not drive them to extinction.

“We are happy to see world governments come together to support the listing of giant guitarfish, wedgefish and mako sharks to the CITES Appendix II. Regulating the trade of these species is vital, as many of them have been pushed to the brink of extinction by overfishing and trade. However, this will only be meaningful if the measures are implemented in a timely and effective manner. This is where the real work starts for everyone involved to ensure these trade controls have real conservation impact and benefit these imperilled sharks and rays,” said Dr Andy Cornish, WWF Global Shark Programme Leader.

Hong Kong accounts for more than 40% of the global trade in shark fins, and is a major consumer of shark fin soup. According to a study published in 2017, shark fins sold in Hong Kong’s dried seafood shops came from at least 76 different species of sharks, including shortfin mako shark, longfin mako shark and guitarfish.

“With more shark and ray species being listed on CITES, we have an increasing risk of mixing listed species with non-listed species. To halt further decline of shark populations, we’re asking everybody involved in the trade and supply of shark fins to help stop the unsustainable and untraceable trade of shark products in Hong Kong: that includes shipping companies, traders, caterers and retailers – and customers.” said Dr Laurence McCook, WWF-Hong Kong’s Head of Oceans Conservation.

To address the issue effectively, WWF urges the government to include wildlife crime offences under Schedule 1 of the Organized and Serious Crimes Ordinance (OSCO) to further deter transnational criminal enterprises who use Hong Kong as a major port and transportation hub for wildlife smuggling. Although trade in sharks and rays is increasingly being regulated by CITES, a quarter of species remain threatened with extinction, while unreported and unregulated shark fisheries are common. A recent survey conducted in Hong Kong revealed that wedding banquets are the main occasions for eating shark fin, with social pressure driving much of that use.

“We urge Hong Kongers to show their support by choosing restaurants that have taken a lead in protecting sharks by removing it from their menus or joining WWF's No Shark Fin Pledge,” said Gloria Lai, WWF-Hong Kong’s Senior Conservation Officer, Sustainability. “Although imports of shark fin and related products dropped by 54% from 2007 to 2018, we still imported some 4,681 tonnes of shark fins last year. This translates into a huge number of sharks.” 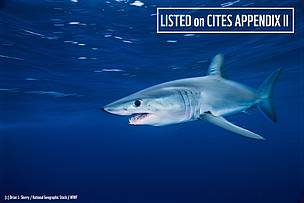 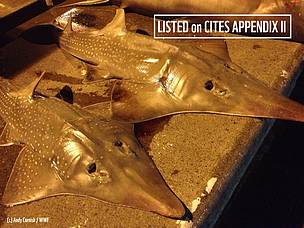 All but one species of the wedgefish are now Critically Endangered
© Andy Cornish / WWF Enlarge
Like this article?