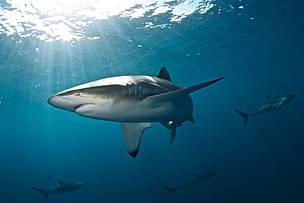 Saying No to Shark Fin
© WWF / Vincent Kneefel
[Hong Kong, 3 June 2020] Hong Kong’s largest ever seizure of shark fin, confiscated by Customs earlier in the year, is confirmed to have been illegally exported. The statement was made by the Ecuadorian authorities at a press conference held on 1 June 2020.The two consecutive shark fin shipments, totaling 26 tonnes and valued at HKD 8.6m (USD 1.1m), were seized by the Hong Kong Customs on 28 April and 4 May.

“It’s time for the Hong Kong government to take decisive action and list wildlife crime offences under Schedule 1 of the Organized and Serious Crimes Ordinance (OSCO). Strong action from the authorities is crucial to deter transnational criminal enterprises that use Hong Kong as a major port and transportation hub for smuggling illegal shark fins and other wildlife products,” said Dr. Andy Cornish, Leader of Sharks: Restoring the Balance, WWF’s global shark and ray programme.

“The sheer scale of the seizures and the number of species facing extinction globally demand an adequately strong response and urgent action. Prosecutions remain low with nominal fines only, which is just not good enough. That is why adding such crimes under OSCO is critical as it should lead to greater fines, deeper levels of investigation, and intelligence sharing amongst agencies.” Dr. Cornish added.

Investigations by both the Hong Kong and Ecuadorian authorities are in progress. Under Hong Kong’s Protection of Endangered Species of Animals and Plants Ordinance, any person found guilty of importing or exporting an endangered species without the necessary permits is liable to a maximum fine of HKD 10 million and imprisonment for 10 years.

The record seizure contained illegal fins from an estimated 38,500 sharks, predominantly from the thresher and silky shark, whose trade is regulated under the Convention on the International Trade in Endangered Species (CITES) Appendix II. While Appendix II is intended to facilitate a legal and sustainable trade, these shipments were exported from Ecuador without the necessary permits, undermining the country’s work to manage its fisheries responsibly.

From 2014-2019, Hong Kong Customs made 59 shark fin seizures totaling 12,238 kg, with 28 cases (total of 6,452 kg) in 2019 alone. Due to limited evidence, only five cases were prosecuted in that period. Even where prosecutions were made, the actual traders behind those trafficking attempts were not always identified.

Hong Kong is the largest trading hub for shark fin, handling over 40% of the global shark fin trade. The unsustainable demand for shark fin soup remains a primary driver in the overfishing of sharks and rays on a global scale. With up to 100 million sharks and rays harvested each year, global populations have seen a drastic decline in recent years, with 30% of all 1,200+ species currently threatened with extinction and 99 species endangered or critically endangered. 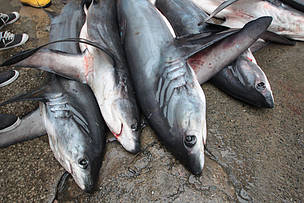 Saying No to Shark Fin
© Andy Cornish / WWF Enlarge
Like this article?